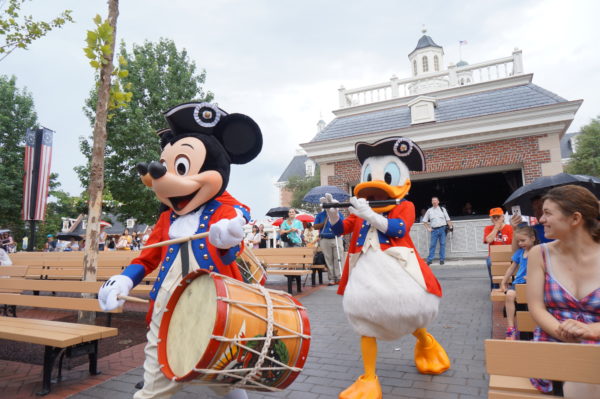 Every year, Disney treats its guests to some very special events on the Fourth of July. As the rest of the country celebrates America’s Independence Day, Disney guests can experience some events that can only be seen on the Fourth of July. Some of them don’t happen any other time of the year, but others are tweaked slightly for the holiday.

Let’s take a look at what Disney is doing for the Fourth of July this year!

1 – Disney’s Celebrate America! A Fourth of July Concert in the Sky

This nighttime spectacular lights up the sky above Magic Kingdom every year for the Fourth of July! This year’s celebration will take place on July 3rd and 4th at 9:15pm. The fireworks will be synced with patriotic music.

For the most part, this fireworks show at Epcot will be the same, but there’s a special Independence Day finale. Snag your spot in World Showcase early for the 9pm show.

3 – Dance Parties in Frontierland and Tomorrowland

Celebrate the Fourth of July with special dance parties in Magic Kingdom’s Frontierland and Tomorrowland. Each party will have a DJ and lots of interactive entertainment.

This show happens every day, but even so, the Muppets are quite the comical characters. On the Fourth of July, The Muppets will present a special patriotic show called …Great Moments in American History. Kermit the Frog, Miss Piggy, Fozzie Bear, Gonzo, and Sam Eagle tell the stories of the writing of the Declaration of Independence and the Midnight Ride of Paul Revere as only they can. The show runs several times a day in Liberty Square near Hall of Presidents in Magic Kingodm.

Voices of Liberty, an a capella group, is known for their regular performances in the rotunda of the American Adventure Pavilion in World Showcase. You can still see this show at 2 and 3pm on the Fourth of July, but you can also catch a special performance in the America Gardens Theatre at 5:30, 6:45, and 8pm.

Besides the regular character meet and greets in the parks, some of your favorite Disney characters including Mickey, Donald, and Daisy, will be dressed up in their best patriotic attire. They’ll be available throughout the day in the American Adventure pavilion.

Disney knows how to celebrate holidays with food, and The Fourth of July is no different! Creature Comforts and Isle of Java in Disney’s Animal Kingdom will be selling a themed cupcake with apple pie filling. At the resorts, check out the sparkly red, white, and blue coconut macaroon dipped in white chocolate at the Boardwalk Bakery and at Disney’s Boardwalk Resort. Next, head over to Amorette’s at Disney Springs for patriotic dipped strawberries and Mickey and Minnie mini-domes.

While all of these celebrations take place across the Walt Disney World Resort theme parks and Disney resort hotels, perhaps the most events are concentrated at Disney’s Fort Wilderness Resort and Campground.

There’s a Fourth of July 5k run at 7:30. Pre-registration for this run is from June 24th to June 30th at the Bike Barn, and you can register on-site at 7am on the day of. The run begins at the field next to Mickey’s Backyard BBQ.

Many people who vacation at the Fort Wilderness Campground do so frequently, so they have some extra things many vacationers don’t like golf carts. The resort will host a Fourth of July Golf Cart parade at 4pm on July 4th. If you want to participate, you can sign up from June 24th through the 30th from 9am-5pm at the Bike Barn

You don’t need anything special to have fun at the Fourth of July Beach Bash, though! Head over to Clementine’s Beach at 6pm on July Fourth for a DJ, dancing, games, contests, a movie, and more! They’ll also have food trucks set up in The Settlement.

Have you ever celebrated the Fourth of July in Disney World? Was it fun?