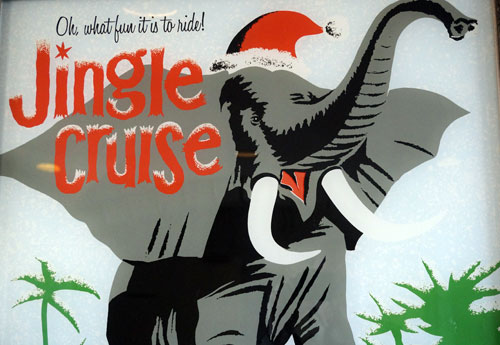 Jingle Cruise Returns to the Magic Kingdom for Christmas 2014

For the second year in a row, Disney has “plused” or enhanced the classic Adventureland attraction the Jungle Cruise. They have added a Christmas storyline and decorations, and have temporarily renamed the attraction the Jingle Cruise.

During the first year of the seasonal change over in 2013, most of the adjustments were in the queue area with very little change in the boat ride itself.

This year, Disney has added more elements along the route of the boat ride itself.

The story goes that the boat skippers had Christmas decorations shipped to them in the jungle. Since addresses are hard to find in the dangerous jungle, many of the decorations are scattered around – probably due to a catastrophe with the delivery or the work of wild animals.

Disney has also rolled out a Christmastime script for the skippers. It is definitely in line with the sarcastic and pun-filled style of the ride. I personally find the style hilarious and love all the energy that the skippers put into the delivery of the spiel.

Do you like the Christmas overlay that turns the Jungle Cruise into the Jingle Cruise?