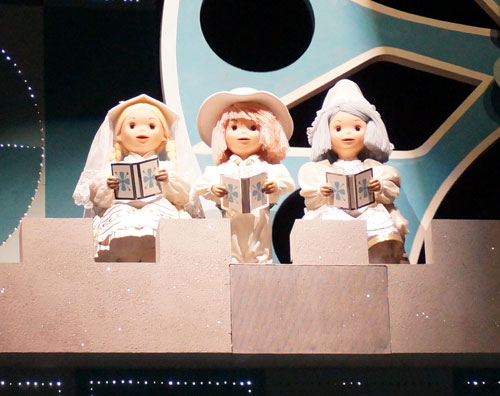 No, the attraction isn’t going away, but it does say good bye – sometimes – in a new and interesting way.

But first, a bit of history.

it’s a small world (the official title is all in lower case letters) was created by Walt Disney himself and his Imagineers at WED Enterprises.  They completed this attraction in just 11 months time so that it would be ready for the 1964 World’s Fair.

Back then, it was called Children of the World and was in the UNICEF pavilion sponsored by Pepsi. Famous Disney contributors Mary Blair and the Sherman Brothers worked on this attraction, and it remains largely the same today holding a special place in Fantasyland in all of the Disney Parks.

It’s quite nostalgic since generations of Disney fans have ridden this very attraction.

it’s a small world hasn’t changed much over the years, but it has recently stepped into the 21st century taking advantage of Disney’s RFID technology in the MagicBands.

Up until recently, MagicBands, launched in 2013, were used as your park ticket, your room key, a way to charge purchases to your credit card on file, and to link your PhotoPass photos to your MyDisneyExperience account. Chip technology in the MagicBand could be read by points in each of these locations allowing a seamless and less cluttered vacation for guests.

Enter talking Mickey Mouse! Magic Kingdom guests can meet and, yes, talk to Mickey Mouse, and in some cases he can talk back! Not only that, he knows your name! How? RFID technology in your MagicBand, of course!

it’s a small world got the new technology and became interactive! Now this popular attraction has three big screens mixed amongst the parting farewells in multiple languages in the final room. The screens display the names of people in the boats!

For reasons I don’t understand, this effect is not always on, but when it is, it’s a nice touch.

This low-tech attraction with 300 audio-animatronic dolls dressed in traditional garb from around the world continues to attract riders even over 50 years after it’s debut. On the busiest days, wait times can reach an hour! Could this new feature bring even larger crowds? It’s possible!

Even more than that, Disney could begin to integrate this feature into other attractions. Consider the new attractions opening at Disney’s Animal Kingdom in Pandora- the Land of Avatar and the new version of Disney’s Hollywood Studios, which we know very little about at this point. This combined with communicative characters means endless possibilities for even more magic and customization to come to Disney World!

Are you excited about the customized ‘good bye’ screens at it’s a small world?