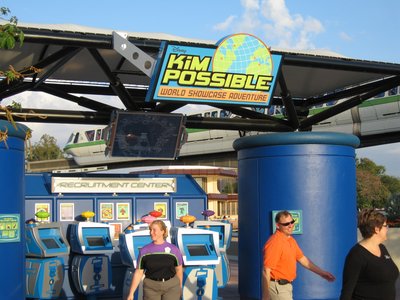 Is the Kim Possible World Showcase Adventure At Epcot Really A Game?

Have you had the chance to experience the Kim Possible World Showcase Adventure at Epcot?

Getting Started On Your Adventure

To begin a Kim Possible Adventure at Epcot in the Walt Disney World Resort, you start at one of the recruiting stations.  There are several location, including Innoventions and the walkway that leads from Future World to World Showcase. You provide your Disney World Resort room key or your credit card for a deposit to receive your Kimmunicator (communicator) device.  The device is actually a Motorola i870 cell phone which is coupled with an advanced GPS device.

You follow the instructions on the device, gathering clues and watching details come to life in the environments and buildings around World Showcase – anything from a talking nutcracker soldier in a shop window in the United Kingdom pavilion to a rock magically displaying a message at the Japan pavilion.  These elements are well themed to each country and are also well hidden until they are activated with your Kimmunicator.  You could easily walk around Epcot and never realize that people were involved in a Kim Possible Adventure.

There are many different adventures, so it is possible to experience the adventure at different times and in many different ways. After you complete your assignment, you return the mobile phone.

If you look carefully at the official name of the attraction, it is labeled an “adventure.” But what does that mean? Is it a game? Or something else? Let’s look at that in a bit more detail.

If you look up the term “game” in the dictionary, one version of the definition shows three key components: competition, skills, and rules.

Let’s see how the Kim Possible Adventure stacks up against that definition:

Competition: The Kim Possible Adventure is not really a competition per se. There is no winner or loser, there are no points to be accumulated, and you are not pitted against any opponent.

Skills:  While you do need to punch in codes to your mobile device, and look for clues, there are not alot of skills required beyond that. But, technically, some rudimentary level of skill in using a cell phone is required.

Rules: There really aren’t any rules in the adventure.  You can experience the adventure in any order, can skip around, and really don’t have any list of predefined rules that you must follow.

So from the perspective of this first definition of a “game”, is the Kim Possible World Showcase Adventure a game?  Sort of, but not really.

Dennis C. Scimeca over at The Escapist Magazine web site asks the question of whether the Kim Possible Adventure is an Alternate Reality Game. What is an Alternate Reality Game (ARG)? It is hard to define clearly.   Some points are hard to understand, like the presence of a PuppetMaster (a person behind the scenes who controls the flow of the game) and Transmedia (telling stories across multiple platforms using advanced technology).  In my own mind, an ARG seems to be something that is very interactive, involves solving puzzles, and changes based on the interaction of the person to the game. It doesn’t follow a straight line and has outcomes that can vary.

Is the Kim Possible Adventure an Alternate Reality Game? Sort of, but not really.

A Game By A Different Name

An alternative definition of the word “game” from the dictionary is “an amusement or any pastime”.

Using that definition, is the Kim Possible World Showcase Adventure a game?  Probably.  It’s a way to have a great time gathering clues and watching small and big details around the World Showcase pavilions come to life.

So – again – is Kim Possible really a game?  An ARG?  Something else? The answer can be yes or no depending on which specific definition you use to evaluate the question.

However, given all that, I don’t think that really matters. All that matters is that the Kim Possible World Showcase Adventure is a new kind of experience, a fun time that can easily be enjoyed by the entire family, and a very enjoyable way to experience a Disney park.