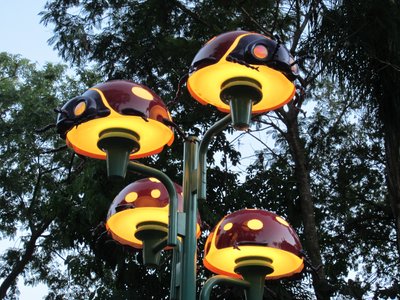 Is Disney’s Animal Kingdom Set Up For Nighttime Use?

Typically Disney’s Animal Kingdom closes relatively early, especially when compared to the Magic Kingdom, Epcot, and Disney’s Hollywood Studios.  Why is that?  Many people say it is because of all the real animals that make Animal Kingdom their home.  Since they call it a day when the sun goes down, the signature attraction – Kilimanjaro Safaris Jeep tour – would also need to shut down.  But aside from that, all the other attractions could remain open.  And many of them have all the facilities and lighting needed to stay open after the sun goes down.

In the other parks, flood lights often illuminate all spaces.  But at Animal Kingdom the lighting is more restrained, and there are places where darkness creeps in a bit.  You can definitely navigate around safely and can clearly see where you are going, but floodlights don’t rule the night.

Unique Lighting Is Already In Place

Disney also has used some clever lighting tricks at Animal Kingdom.  The Tree Of Life, the symbol of the park and the home to the It’s A Bugs Life attraction, is nicely light up a night.  But the tree isn’t illuminated with exterior flood lights, but instead uses lights inside the tree that give it a very unique glow.

So can Disney keep Animal Kingdom open at night?  The answer is definitely yes – and occasionally they do keep it open well after dark.

Some people say that people don’t stay at Animal Kingdom at night because there aren’t enough attractions to make them stick around.  Possible a bigger reason is that there isn’t a nighttime spectacular that draws people in – like Wishes Fireworks at the Magic Kingdom or Illuminations at Epcot.  A fireworks show probably isn’t an option at Animal Kingdom because of so many live animals in the area.  At one time there were rumors of a nighttime parade, but that never came to be.  Perhaps someday if it does, there will be more people who stick around to enjoy it and everything else that Disney’s Animal Kingdom already has to offer after the sun goes down.