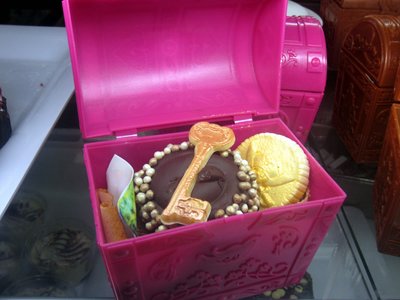 When Disney introduced the new walk-through attraction called “The Legend of Captain Jack Sparrow” in the Mickey Avenue area of Disney’s Hollywood Studios, they wanted to do more than just send out a press release and invite the newspapers and bloggers. They also wanted to celebrate with some food!

You can now purchase a Treasure Chest with a chocolate cupcake for the pillaging price of $8.99. It’s available at the Starring Rolls Café (located on Sunset Blvd near the Hollywood Brown Derby) and also at the Studio Catering Company (located in the Streets Of America section of the park near the entrance to the Studio Backlot Tour).

So what do you get for nine dollars? First there is the main attraction – a chocolate cupcake topped with chocolate butter cream and decorated with edible pearls. You also get a doubloon and some interesting-looking “barnacles” as well as a key and map. All this comes in a plastic treasure chest that was available in either pink or orange.

The contents of the Treasure Chest, including the cupcake. 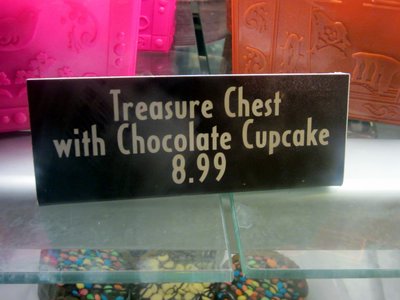 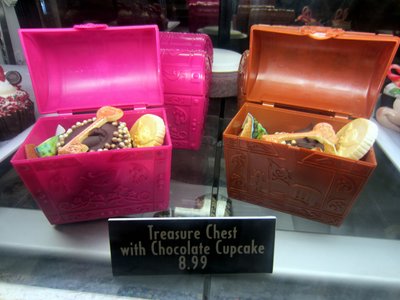 Select either the pink or orange chest.

I’m a big fan of Disney food. I will gladly spring five dollars for the unique taste treat that is the frozen apple juice concoction of LeFou’s Brew in Gaston’s Tavern over at Fantasyland in the Magic Kingdom.

But I just couldn’t bring myself to purchasing a cupcake that costs nine bucks – even if it came in a very nice treasure chest box with some extra goodies.

So instead, I decided to purchase a Gingerbread Cupcake with Cream Cheese Frosting and a Mickey Mouse Christmas chocolate topping. Very good! 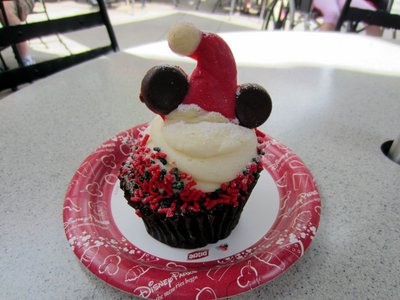 What do you think about this pirate-themed cupcake treat?