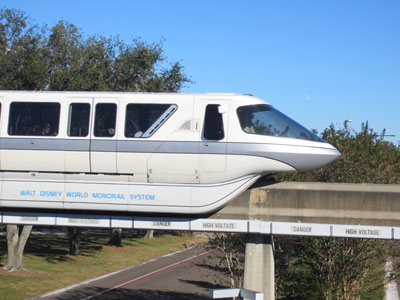 Many people, including me, are fascinated by the monorails at Walt Disney World. With the possible exception of Cinderella Castle, they may just be the most iconic of all the symbols that represent Disney World. Somehow, the Disney monorails embody efficiency, planning, and forward thinking in a way that seems to capture the hearts and minds of guests around the world.

I recently had a chance to interview a former Disney World Cast Member who as a monorail driver. Eric was kind enough to answer some questions about his time working at Disney World when he actually drove the monorails.

You might be surprised at what you will learn.

Let’s see what Eric has to say:

Question: When did you work at Walt Disney World?

Question: How did you get your job at Walt Disney World?

Answer: I walked into Disney’s Casting Office [that’s Disney-speak for their employment office] and was hired on the spot the same day. They do that, or at least they used to, to fill positions for busy seasons. I was a permanent, full-time employee.

Question: What was your job? What duties did you have?

Answer: I was a Monorail Host. When I first started I stood at the gates and assisted guests who came though. Sometimes I would check tickets at the gate of the monorail station [that was back in the day when you actually needed a ticket to ride the monorail]. Sometimes, I would stand up on the platform where the monorail comes and goes. I would direct guests.

I think there was a limit of ten guests for each gate. Sometimes people wouldn’t understand English. I would attempt to communicate “ten here” in Spanish by saying “diez aqui.” I say that I “attempted” that communication because, many times, the guests would still cram 15 people into the gate, and then look at me and smile in a kind way, but a way that indicated they didn’t understand me.

Later, I was promoted to Monorail Driver. For that role, I had to study a course because each part of the track had a certain speed limit. For example, entering the Contemporary Resort, I believe the speed limit was 3 mph. If you went over limit, the monorail would shut off and stall out automatically. It wouldn’t start again for about 10 minutes, which was very embarrassing. If you got too many “speeding violations” you were not allowed to drive for a while.

Question: What did you like about your job on the monorail?

Answer: Everyone thought that monorail drivers were cool and they were right. LOL

Question: What wasn’t so much fun about your job on the monorail?

Answer: Standing in the heat wearing a wool hat and long pants. I don’t think that Cast Members have to wear those costumes anymore. I know they have shorts now. Lucky ducks!

Question: Did your job ever become monotonous?

Answer: There were slow times. As employees, we had to stand apart from the other workers most of the time. I never really got to meet and talk to my co-workers. The job was sort of isolating in that way. I got to talk to thousands of guests (for about 3 minutes each), but I only waved at other employees from afar! It was funny because, even though I was around so many people, it became a lonely job. I came to work, stood in my spot where I was told, did my time, and left. I never really got to know anyone else who worked there. You saw each other but didn’t get to know one another. No one really talked to me much, and I didn’t really get to talk to anyone else. I guess that is life in the big city of Orlando!

Question: What would surprise people about the monorails?

Answer: We parked the monorails in a garage behind the Magic Kingdom at night. You had to drive the monorail up so that the nose touches a tennis ball that hangs from the roof. It must touch perfectly. The ball hangs directly at the edge of the track. I doubt if you would be able to drive the monorail over the edge – I hope there was a safety feature to prevent that? That garage is where the monorail track ends.

Question: The tragic death of monorail driver Austin Wuennenberg in 2009 focused the world’s attention on the monorail’s safety. What was your experience, and what are your thoughts, regarding monorail safety?

Answer: I found the Disney monorails to be extremely safe, with many different safety measures and features. I don’t understand how that tragedy could have happened. Knowing Disney, I doubt that it will ever happen again.

Question: Do you have any interesting stories about your interactions with guests?

Answer: I got the sense that everyone wanted my job. I don’t blame them. If you can stand the “crowded isolation” as I described above, it’s a pretty cool job. One day I got to see Sally Struthers (“Gloria” from the TV sitcom “All in the Family”) filming a commercial at Epcot. That was neat.

Question: What advice do you have for people who want to work at Walt Disney World?

Answer: Don’t go there thinking that you are going to be a pirate in the Caribbean! LOL. The Disney Casting department will place you where they think that you will best fit in the “show”.

Answer: I probably would have stayed on as an employee at Disney longer, or would even still be working there, if I had lived closer. I had to drive on interstate highway I-4 (also known to locals as the “parking lot”). It took me at least one hour each way to get to work and get home. If you have to drive more than 30-40 minutes, it’s probably not worth working there.

Would you like to be a monorail driver at Disney World?