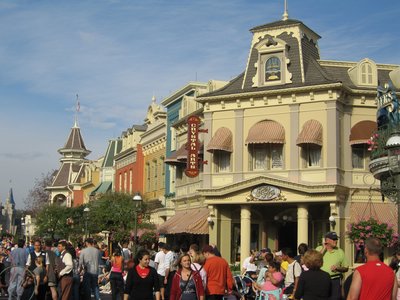 The Magic Kingdom park opened in 1971, and it is the most visited theme park in the whole world. However, the Disney World magic goes well beyond just the Magic Kingdom.  Let’s take a look at four interesting tidbits on how Disney focuses on the little details, and in doing so creates magic.

Each building has a real restaurant or shop on its first floor, but the top is empty, and so was squeezed and altered so that the second floor of the building is shorter than the first floor and the third floor is shorter than the second. The resulting effect is that the Cinderella Castle towers over the Magic Kingdom just as a royal structure should, though the Castle itself is only 190 feet tall.

The Magic Kingdom is built atop a series of underground “utility corridors” that are used by the Disney character performers to travel around. This is to maintain the theme and illusion of separateness of the lands within the Magic Kingdom.

3. The Hall of Presidents is More Lifelike than you would Think

The Hall of Presidents, located in the Liberty Square land of the Magic Kingdom, is famous for its Audio-Animatronic likenesses of all 44 of our nation’s past and present presidents. The narrator of the hall has changed four times, from the original narrator Lawrence Dobkin from 1971 – 1993. In 1993, Maya Angelou was the narrator until 2001 when J.D. Hall took over. Just recently, in 2009, Morgan Freeman took on the role as narrator of the Hall of Presidents.

The more exciting fact this: in 1993, along with the first narrator changeover, came a new tradition in the Hall of Presidents experience when the current President of the United States recorded a special speech for his Audio-Animatronic likeness to perform. Bill Clinton, George W. Bush, and Barack Obama have each taken part in forming and maintaining this tradition.

4. The Japanese Love Disney Bears More Than Americans Do

In addition, Disney Japan gave birth to the character Duffy the Disney bear – who now appears at Epcot in a meet and greet. Funny how things come full circle!

The More You Know…

The more you learn about Disney World, the more you can appreciate the magic that Disney creates.

What is your favorite Disney trivia tidbit?