Interesting Facts About The American Adventure

Walt Disney truly loved the United States. His daughter Diane reported that whenever Walt watched the flag lowering ceremony in the evenings at Disneyland, Walt would shed a tear. He enjoyed telling stories about Abe Lincoln, the American family, and American history. It only seems fitting that the host pavilion for Epcot is the United States and that the American Adventure show recaps the story of America.

Here are some interesting facts about The American Adventure.

Original designs for Epcot called for a United States pavilion to be located at the entrance to World Showcase, housed in a modern building. Guests would have to walk beneath the structure, which would be built on stilts, to access the other countries. However, the idea was seen as elitist and was later dropped. Instead, the building was put at the far side of the lagoon to act as an anchor.

The decision to build the American Adventure was easy, but it’s development was hard. It took Disney Imagineers no less than six different attempts to summarize the 350+ years of American history into the 28 minute Broadway-quality show that millions of visitors enjoy.

George Terpatsi was the architect for the building that houses the American Adventure. It is built in the style of a Georgian mansion and draws inspiration from iconic American buildings such as Independence Hall in Philadelphia and Thomas Jefferson’s Monticello outside Charlottesville, Virginia. 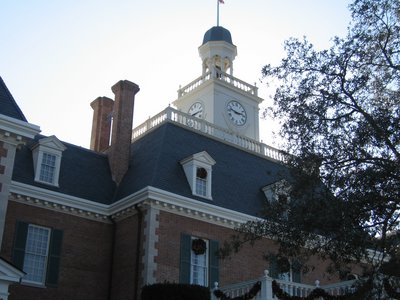 The architecture of the American Adventure is both historically accurate and beautiful.

Disney conducted detailed research to make the show as accurate as possible, using references sources such as the Library Of Congress, United Press International, the Associated Press, and the Smithsonian. They even accurately duplicated the unusual presidential seal of President Roosevelt and used an actual recording of Roosevelt’s voice in the show. They also researched details such as the unique color of gasoline as it existed during the Great Depression.

Disney decided to start the history of America not with the Revolutionary War but with the Pilgrims. The show does not state that Pilgrims discovered America, but only that they created the first successful settlement.

The American Adventure is the only country pavilion to include critical information about the country. The show addresses delicate issues of slavery, women’s suffrage, and relations with Native Americans. 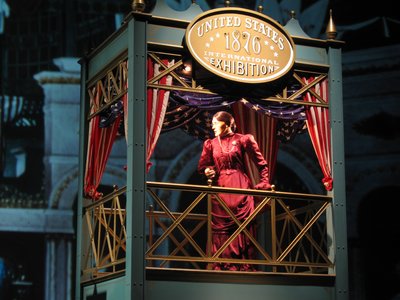 The show touches on some difficult aspects of history, like women’s right to vote.

Disney originally wanted three hosts for the show, each representing the 18th, 19th, and 20th centuries. They originally planned to use Ben Franklin, Mark Twain, and Will Rogers, respectively. But focus group testing showed that most people didn’t know who Will Rogers was – so he was moved to a minor role in the show. Rogers, by the way, was an American cowboy and actor who made more than 71 films in the 1920s and 1930s, and also wrote more than 4,000 newspaper columns. The son of Will Rogers – Will Rogers Jr. – recorded the voice of this father for the show. 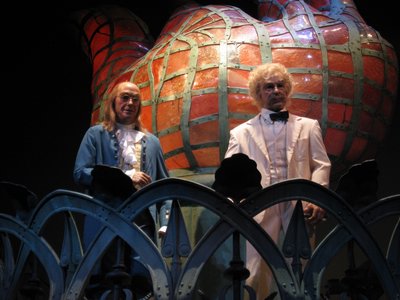 Ben Franklin and Mark Twain are the hosts for the show.

George Washington does not speak during the show. Instead, he is shown alone, sitting on his horse as soldiers grumble about lack of supplies. This shows the incredible responsibility Washington bore. 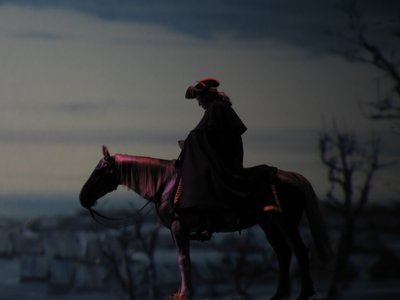 The show carefully portrays the immense burden of George Washington.

The scene of the gas station during the Great Depression was modeled after an actual photograph from Life Magazine.

As you leave the lobby and take the escalators into the theater, you pass beneath 44 different flags that have represented the United States during different periods of history – including those of colonies, territories, and countries that in past history have claimed sections of land that are now part of the United States. 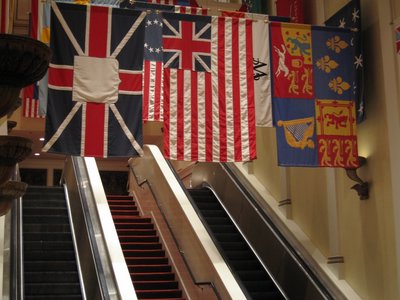 Disney artists created about 30 unique paintings for the rotunda lobby of the show. By creating their own art, each matching the style of it’s respective time period, Disney could match the story of the show itself. 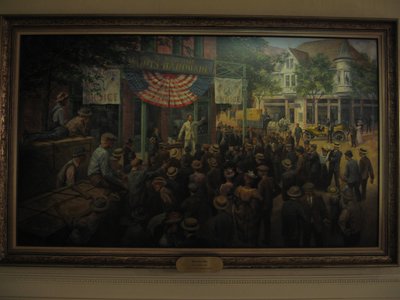 Paintings created by Disney artists match the time periods represented in the show.

There are 12 different statues in the show auditorium that represent the characteristics and attitudes that helped to build America and include Adventure, Freedom, Innovation, Individualism, Self-Reliance, and Pioneering. 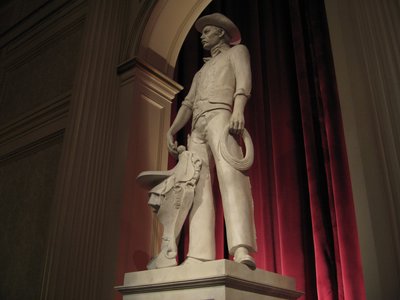 Many characteristics and personality traits are represented in the American Adventure.

During early scenes of the show, paintings are used as backgrounds projected behind the show scenes. It is only after the time of the Civil War in the chronology of the show and history that photography was invented. From then on in the show, the background projections are photographs.

The train station in the New Orleans land at Disneyland was used to stage the photograph of the arriving coffin accompanied by the Disney-created song “Two Brothers.”

Interestingly there are no recordings of the voice of Alexander Graham Bell – who man credited with inventing the phonograph. In order to determine how to portray Bell’s voice, Disney researched his past. For example, Bell’s father was a teacher. They used this information to estimate how Bell’s voice might have sounded.

There are 35 different Audio Animatronics characters in the show, including Disney’s first ever walking character – Ben Franklin.

A huge carrousel like structure holds ten different show scenes that slide and are lifted into place on the stage using hydraulic lifts.

The American Adventure was the first show to put speakers near the Audio Animatronics characters instead of playing their audio over the theater audio system.

Thanks to Jack to this and this great article.