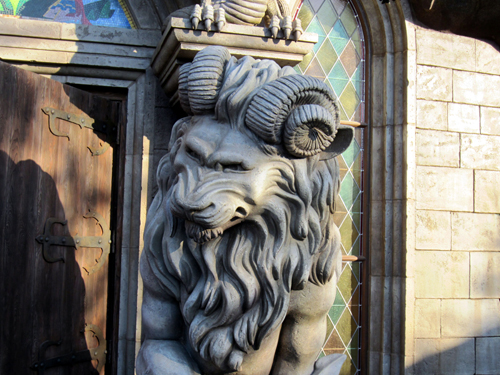 Many Disney enthusiasts love to spend their free time learning everything they can about Disney. I have books, guide maps, blog subscriptions, and a Disney Wishlist. I like to learn new things then test them out on my next visit. Here are 12 things you probably didn’t know that you can check out for yourself on your next vacation.

12. Splash Mountain and Pirates Of The Caribbean are nearly neighbors.

Although Splash Mountain is in Frontierland and Pirates of the Caribbean is in Adventureland, they are practically neighbors. Disney Imagineers use forced perspective in many areas around the parks, and things on stage look differently from things backstage. Because of this, guests can feel like they are in completely different areas, but the attractions are actually very close to each other. Since both of these rides require lots of water, it’s a convenient and efficient way to supply both rides.

11. There’s more than one beast in the castle.

The Beast from Beauty and the Beast is actually a mix of several animals including buffalo, lion, wolf, bear, etc. Maybe this is why he looks extra scary!

There is also another creature outside of the castle that the Imagineers created. The Golions on either side of the Be Our Guest restaurant are a combination of a goat and a lion, and they fiercely guard the castle.

Epcot’s World Showcase aims to transport guests into the history of each country. In France, the Eiffel Tower is actually historically, though not modernly, accurate. When designing the iconic tower, Imagineers used blueprints from the original tower that was constructed in 1887. When it was built, the Eiffel Tower was a beige color, which is how it is represented in World Showcase. Even though weathering has turned the color of the tower in France, Imagineers want guests to experience the France of old, so the tower in Walt Disney World is the original beige color.

9. The bear at Disney’s Wilderness Lodge is a real Disney character.

The totem pole outside of the Wilderness Lodge Mercantile in the lobby depicts Mickey, Goofy, Donald and another character. Humphrey the Bear has appeared in many Disney cartoons over the years, so don’t be surprised if he looks familiar to the… more mature… Disney fans.

8. There is a coded warning at the entrance of Typhoon Lagoon.

Upon entering Typhoon Lagoon, look up and you’ll see official looking nautical flags. These flags are real, and they send guests a coded message. Fortunately, most people don’t know how to decipher the code. If you did, you might not be as willing to jump into the Surf Pool since the message reads “Piranha in pool.”

7. You can decorate a Christmas tree in Liberty Square.

The Ye Olde Christmas Shoppe in Magic Kingdom celebrates Christmas all year round, and if you’re lucky, you might be able to help them!

If you happen to be one of the first guests in the store, the Cast Members might ask your family to decorate a small tree then label it with your name for the day! If the tree is not decorated when you arrive, ask one of the Cast Members if you could decorate it. However, be aware that this may not always be an option and the Cast Members don’t have to oblige.

5. There are different Mickey stickers.

If you’ve ever visited Walt Disney World, you’ve probably received free Mickey stickers. Cast Members will pass out stickers at various locations like the Magical Express, hotel lobbies, and in the parks. If you’ve ever taken a survey, you might have received another Mickey Sticker that shows Mickey with a pencil and a clipboard. It’s not surprising that Disney has different stickers to represent different areas and activities.

4. Your FastPass+ has a grace period.

Have you ever missed your FastPass+ reservation return time by just a few minutes? Maybe the bus was running late or the traffic was really bad. Although it’s not widely advertised, and I wouldn’t suggest pushing the time too much or too often, your FP+ does have a grace period. Some guests have reported that they’ve arrived up to 10 minutes after their return time.

3. Charlton Heston misspelled his own name.

In the courtyard in front of the Chinese Theater in Hollywood Studios, many celebrities including Alan Alda, Jim Henson, George Lucas, and R2-D2 have placed their names and handprints in the concrete. Charlton Heston, star of The Ten Commandments, Ben Hur, and Planet of the Apes, seems to have omitted the “l” in his first name making his signature say Charton Heston.

Splash Mountain is one of the most popular rides in the Disney Theme Parks, so it’s no surprise that both Disney World and Disneyland have the attraction. But did you know that the two mountains are not identical? Splash Mountain in Disneyland has more natural colors like green grass and brown dirt. Splash Mountain in Disney World appears a little more orange so that it blends in with Big Thunder Mountain Railroad, which is right next door. Since guests would only notice this difference if they visit both parks and if they look very closely, Imagineers decided it was better to blend than contrast in Walt Disney World.

1. The inspiration for Toy Story is inside Toy Story Midway Mania.

Pixar’s Toy Story series began in 1995, but the inspiration was actually much earlier. The 1988 Pixar Short named Tin Toy, which itself was inspired by the Tin Toy Golden Book, also supplied the inspiration for Toy Story. This is especially obvious when the Tin Toy Drummer arrives under the couch and sees the other toys who are as scared as he is.

The Tin Toy Golden Book makes an appearance in Andy’s Room where you either board or exit Toy Story Midway Mania. Next time you see it, remember that the Imagineers add these little details where you least expect them.

Disney trivia fan?  How many of these did you know?