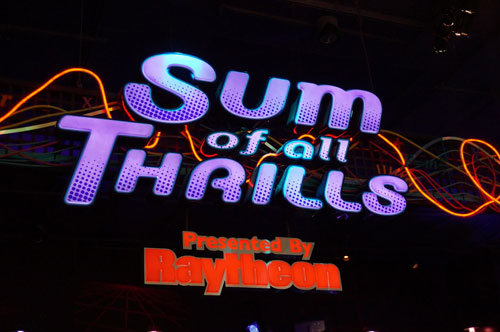 If you checked out my recent article on Innoventions West, you know that I believe Disney has a long history of corporate sponsorship of attractions and displays in the parks. That corporate presence goes back to Walt Disney himself and you can especially see it at Epcot.

While he may have been speaking in terms of “Epcot the city” vs. “Epcot the theme park”, Walt is quoted as saying, “EPCOT will be an experimental prototype community of tomorrow that will take its cue from the new ideas and new technologies that are now emerging from the creative centers of American industry.”

One of the places where we can see the ideas and technologies from American industry up-front and center is in Innoventions.

Let’s take a look at what is happening in the set of pavilions in the East side:

Weather is unpredictable, but inside the Stormstruck exhibit, you can count on storms to show up like clockwork. It’s all in the name of fun, with an educational slant to help teach folks about preparing for bad weather. This exhibit is sponsored by the Federal Alliance for Safe Homes.

The first version of this exhibit created a ruckus for both Disney and the sponsor, Anthem Blue Cross and Blue Shield. Some folks found that initial version to be offensive for its portrayal of overweight people. The new version stays clear of that controversy and focuses on teaching health lessons through interactive experiences.

Sum of All Thrills

In my opinion, the Sum of All Thrills, sponsored by Raytheon, is the hidden gem in Innoventions (East and West). It tells a compelling story on how to use science and design to build and then ride your own roller coaster. It is one of the few exhibits, aside from the Disney Visa by Chase meet and greet area in Innoventions West, where you will consistently find a line. I think there is a line for two reasons: The attraction is fun, and capacity of this exhibit, which relies on some impressive industrial robots, is relatively small. Still, it is worth the wait.

Green building is all the rage these days, so it makes sense that Green Builder Media sponsored this exhibit that shows how families can take advantage of green design, home automation, and energy efficiency in their own homes. The tour of the Vision House takes about 20 minutes. Before you head in, you can test your “green” skills by answering questions on interactive computer screens.

Who else but Underwriters Laboratories can make smashing TVs fun? While you can test smashing a tube TV (and I’m not sure there are many tube TVs being sold these days), the idea of trying to break stuff to make sure it is safe is interesting. However, many of the exhibits in this area seems dark, “turned off”, or too slow for today’s iPad generation.

Nanotechnology is the study of really small stuff. It’s a big topic these days. Nanotech gets just a little floor space with some interactive computer stations and some signs that try to make a very important topic interesting, but not very effectively.

Disney has carved out a section of Innovations for making FastPass+ reservations and answering questions.

What is your opinion of Innoventions East: “Good as is” or “Needs an Update”?