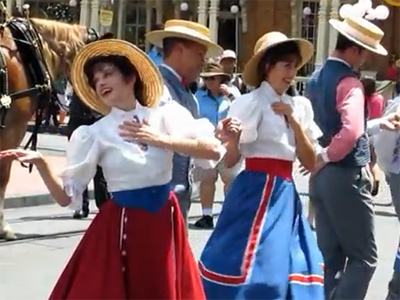 If you have never seen the Main Street Trolley Show, which features the catchy song “I’m Walking Right Down The Middle Of Main Street USA“, then you are missing a real treat. And unfortunately many people do miss this show. If you arrive at the Magic Kingdom and immediately run down Main Street to get to in line for Space Mountain, The Haunted Mansion, or some other E Ticket attraction, you are missing one of the hidden gems and little details that truly makes Disney World special.

You normally will not see the Main Street Trolley Show listed as an event in the Times Guide, which is the slip of paper that notes the times of all the major shows and events in the park that day. However, the Cast Members around Main Street can tell you when it will be performed. Generally ,the show takes place around 9:15am, 10:10am, and noon. Or, you can simply hang around Main Street USA in the morning.

The Main Street USA Trolley Show is a great way to start your day at the Magic Kingdom.

What To Look For

Look for the red trolley carrying the dancers and performers all dressed up in period costumes. They make several stops along Main Street USA to perform the show. For the performance that takes place directly in from of the Main Street Train Station, the performers break up into two groups – one that stays on the street and another that performs on the balcony overlooking Main Street.

The highlight of the show is the song “I’m Walking Right Down The Middle Of Main Street USA”. The song was written by Stu Nunnery.  According to an interview (Source), Stu wrote the song while working as a Jingle Composer for Louise Messina Company, Sicurella & Associates in New York City back in 1978.  Disney purchased the song in 1980.  Originally, the song was supposed to help celebrate Disneyland’s 25th anniversary. However, it wasn’t used until five years later when it was debuted in a television special and sung by Marie Osmond.  Stu said he occasionally gets a check, for about $240, for airplay of the song.

Now, the show is used to entertain guests as they linger on Main Street. It doesn’t have thrills or special effects – just good old singing (ok, lip syncing to the music played on speakers) and great dancing that will leave you will a smile. If you’ve never seen the show, do yourself a favor and make time for it then next time you visit. You will be glad you did.