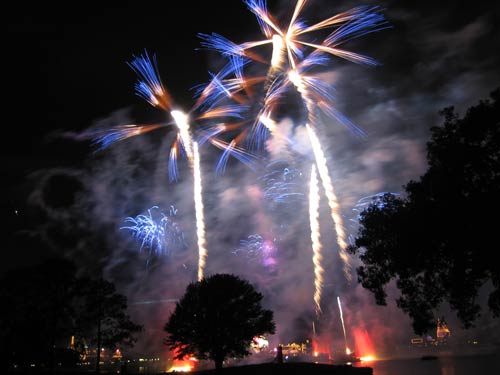 Disney likes to offer its guests an amazing show to end their day. At the Magic Kingdom it is the Wishes fireworks show. At Disney’s Hollywood Studios, it is Fantasmic. At Disney’s Animal Kingdom, it is – well, nothing, yet, although the Rivers of Light show is coming.

At Epcot, the nighttime spectacular is Illuminations: Reflections Of Earth.

Disney originally premiered the show in October, 1999 as IllumiNations 2000: Reflections of Earth. This was a part of Disney’s celebration of the millennium. However, the show was so popular that Disney decided to keep it on by removing the “2000” and continuing to run the show every night.

Even through the show is pushing 15 years, it is still immensely popular. It won a “Golden Ticket Award” in the Best Outdoor Show Production category as recently as 2012 by the Amusement Today website, which compiles votes from extreme theme park enthusiasts.

Did you know that there is a storyline for Illuminations?

There are three different sections or acts to Illuminations:

Chaos – This section represents the creation of Earth and includes lots of fire and explosions.

Order – This section is where the barge containing the huge globe moves into the center of World Showcase Lagoon and represents the cooling of the earth after creation, moving from hot red colors to cool blue. Famous landmarks and scenes appear on the globe, the buildings of the country pavilions light up, and there are fireworks.

Meaning – This third and final section is where all the torches around World Showcase re-light to signify unity, with lots of fireworks in a grand finale. The catchy song “We Go On” accompanies the fun. The song was composed by English composer Gavin Greenaway with lyrics by Don Dorsey.

The show uses many different elements on a grand scale to create a memorable production: lasers, fire, water fountains, and fireworks; and even though the show has been running for many years, it still utilizes some very interesting technology:

The complete barge system weighs an amazing 350,000 pounds and was the world’s first video display system of its kind, featuring more than 180,000 individual LED lights. It is run by six separate computers and includes more than 250 strobe lights. This is the only barge in the show that is piloted by a human captain driver.

The fire effects in the show shoot up to 60 feet in the air and are powered by liquid propane. Every night, the barge uses more than 400 gallons of fuel.

The barge houses some of the fireworks for the show, which are launched into the air with a compressed air system developed by Disney that replaces the typical black powder launch system. The fireworks themselves have imbedded chips which precisely control the timing of the fireworks explosion and coordinate it with the musical soundtrack. Each show includes more than 700 different fireworks.

Three different lasers, located in the Mexico Pavilion, the Canada Pavilion, and the American Adventure Pavilion, cover the lagoon and can be aimed by show producers at various mirrors around the park to redirect and enhance their coverage.

Various barges spray up to 4,000 gallons of water per minute into the air and are illuminated with lights.

A Great Way To End The Day

Thousands of people enjoy Illuminations each day as a way to cap off their day of fun at Epcot.