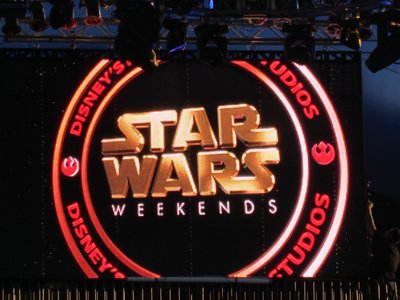 Stars Wars characters are often busy in laser battles and schemes to save or destroy the galaxy. What if you got to see another side of them? The side that likes to dance and party? Now you can – at Disney’s Hollywood Studios Star Wars Weekends.

Snig and Oopla are back in 2013 as the hosts of the extremely popular Hyperspace Hoopla. It’s a dance off between the good guys of the Star Wars world and the bad guys. And the results are entertaining.

Emperor Palpatine makes a big appearance this year, showing off his moves to the party anthem “Fight For Your Right to Party.” Boba Fett and Darth Vader dance to “Bad” by Michael Jackson. And we see some big dance numbers to Gangnam Style and the Harlem Shake.

In the end Mickey Mouse shows up to wrap up the show.

The dance extravaganza takes place on a stage set up in front of the giant Sorcerer Mickey Hat.

Let’s take a look at a few photos and a full video of the show.

Note the video contains the complete show, except for about 2 minutes that happened 28 minutes into the show with the song Bruno Mars-Runaway. Apparently the YouTube copyright engine didn’t like that I posted that, so I had to remove it.

What do you think about the Hyperspace Hoopla show?