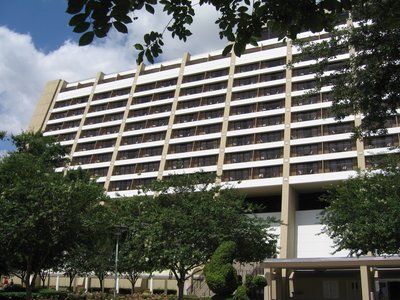 If you are a fan of the Walt Disney world history, you probably know that Disney’s Contemporary Resort Hotel and Disney’s Polynesian Resort Hotel where the first two built on property.  Both of these hotels are connected by the monorail to the Magic Kingdom and to the Ticket In Transportation Center.

Their rooms for both of these hotels were built off-site, at a factory about 3 miles from the hotels themselves.  The rooms were modular and were complete with fixtures, carpeting, bathrooms, air conditioners, and even wallpaper.  And yes, the wallpaper was a hideous 1960s design.  The structure of the hotels was built on-site and the rooms were slid into the hotel structure, much like sliding drawers into a dresser.

The design and construction was done by the United States Steel (USS) Corporation.  If you watch this YouTube video, it plays much like a 1960s corporate promotional video that it is.  It has some of the only video footage I have ever seen of the actual construction process.

The Role Of United States Steel

Originally, United States Steel was not only the construction company for the two hotels, but it was also the owner of the hotels.  When Walt’s brother, Roy O Disney, went to inspect the progress of the under-construction hotels in advance of the opening of Disney World, he found that the construction process was woefully behind.  Legend has it that he found it workers taking naps in the heat of the day, with very little work being accomplished.

The United States Steel project managers said about the hotels would not be ready for the grand opening of Disney World in October of 1971.  Roy was not going to allow that to happen.  Using his financial expertise, and probably a lot of very difficult phone calls, he came up with additional money to purchase the hotels from United States Steel.  In the end that Disney had complete control of the project, and the hotels were opened on time.  Like so many decisions that Roy made, in retrospect this was a very good one.

If you watch the video, you’ll hear this forward looking phrase: “We’re confident that schools, hospitals, and other structures will soon be built this revolutionary way.”  In fact, there were even grand ideas of being able to remove the rooms when it was time to update them.  Simply slide the old room out and slide in a new, improved room.

The construction method truly was revolutionary, but we haven’t seen many other structures built this way – with rooms assembled and factories in slid into the structure like drawers into a dresser.

A big reason why we probably have not seen more construction like this is because of what happened with these two original hotels.  As the structure settled, it was no longer possible to remove the rooms with cranes.  They have become permanently wedged into place.

Even so, it was an amazing experiment with a new construction technique.