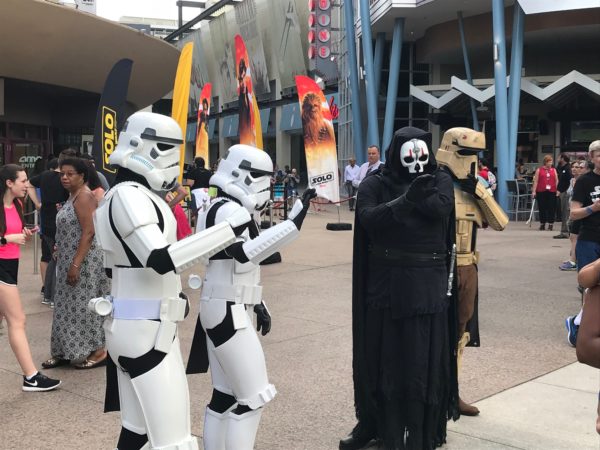 How to Work in Star Wars: Galaxy’s Edge at Hollywood Studios

Are you quirky, eccentric, personable and able to improvise? You might be just what Disney is looking for!

Many of the “characters” found inside Disney parks seem like normal people. Every single person (from the janitor to Mickey) is playing a role. When they are “on stage”, they’re performing.

When Star Wars: Galaxy’s Edge opens in Disney’s Hollywood Studios on August 29th, the new land will need “regular citizens” to fill in the landscape and fulfill the storyline of the land. One such character will be a “Gatherer”.

These Gatherers should be warm and inviting and “capable of leading a structured, interactive experience” because it will be their job to help guests build lightsabers – an activity at which they are experts!

Their on-stage job, though, is to play the part of someone who collects what most would consider junk from all over the galaxy; however, they know that this “junk” is priceless history. Gatherers will work inside Savi’s Workshop where the “junk” is kept. They are the “townspeople”, so to speak, of Star Wars: Galaxy’s Edge. The workshop is a cover for their true purpose of restoring balance in the galaxy and training new Jedi recruits.

These “townspeople” jobs are open to all abilities, genders, and types. If you can act, improvise, can work well with guests, and are at least 18 years of age, Disney welcomes you to apply!

If this sounds like a good job for you, you can audition on May 19th and 21st at 4pm and May 22nd at 10am at Disney’s Animal Kingdom’s Rehearsal Facility. Sign in starts at 3, but you should update your profile on Disney’s Job Site before arriving. You should also prepare the script linked to the job on the same site.

If you make it through the first round of auditions, you will have to be available for call backs on May 28th and 29th, and you should be able to start work on August 29th when Star Wars: Galaxy’s Edge opens. If you get the job, you’ll be covered by the collective bargaining agreement with the Actor’s Equity Association, and be paid Cast member wages, which was recently increased.

Interested in working in Star Wars: Galaxy’s Edge?  Here is your chance.