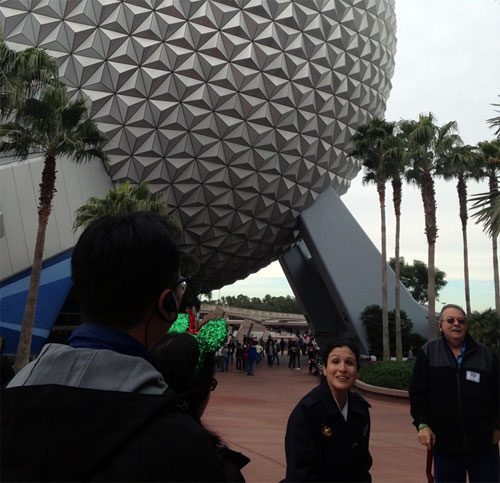 How to Experience Walt Disney World when it’s Nearly Empty

When most people think of Walt Disney World, they think of happy things like riding their favorite attractions and seeing their favorite characters, but they probably also dread the lines and the crowds that can sometimes put a damper on the dream vacation. After all, Disney is much more crowded most of the time than the commercials and promotional material represent.

What if I told you that you could experience an almost empty Walt Disney World? Read on and find out how!

On a recent vacation to Walt Disney World, we booked a behind the scenes tour at EPCOT called the Undiscovered Future World tour. Many tours begin before the rope drops in the parks, but most of them meet outside the gates.

The Undiscovered Future World tour meets in guest services inside EPCOT to the left of the iconic dome. Since the tour started at 8:30 AM, and the park opened at 9:00 AM, we made sure we had plenty of time to explore and be at Guest Services on time. We arrived at the park around 8:00 AM and headed straight for the ticket window where they directed us to the entrance. Cast Members were already waiting. We told them we had reservations for the tour, we scanned our magic bands, and we were in!

With a little planning, guests can also experience an empty Magic Kingdom. There are a few ways.

The Magic Kingdom has its own tours. The Keys to the Kingdom and The Magic Behind Our Steam Trains Tour both begin before the park opens. These tours will not only get you in before the crowds, but will give you unprecedented access to backstage areas.

Magic Kingdom also has some wonderful character dining experiences. If you’re lucky, you and your party can book a dining reservation before the parks open and have breathtaking views of Cinderella’s Castle, Fantasyland, and the Hub with virtually no crowds!

The Crystal Palace, on the edge of the Hub in Magic Kingdom, opens at 8:00 AM for breakfast. Dine with Winnie the Pooh and friends while looking at Cinderella’s Castle a full hour before guests without Advanced Dining Reservations can even enter! The best part about the Crystal Palace is that the meal is served buffet style, so guests don’t have to wait for their food to arrive.

Cinderella’s Royal table, which is currently closed for refurbishment but is expected to reopen in the Spring of 2015, also accepts reservations as early as 8:05 AM. Mingle with your favorite Disney Princesses while enjoying a feast fit for royalty.

If you plan your time just right, you can arrive a little early and meander through the park while on your way to the restaurant. Some parts of the park will be roped off, but just being able to see them almost empty will take your breath away.

Soak in the details that are often hard to see when there are so many people around. Take pictures of your family walking down Main Street USA alone, and pose in front of the Partners Statue and Cinderella’s Statue.

You might even be able to finish up your meal in time to get a jump on the crowds. The first hour of park opening is the best time to get the most bang for your buck. Since lines are shorter, you can see and do more in the first hour than may be possible all day!

You may even find a Disney Photopass Photographer ready and willing to take your family’s picture!

Have you ever been in a Disney World Park when it was nearly empty?