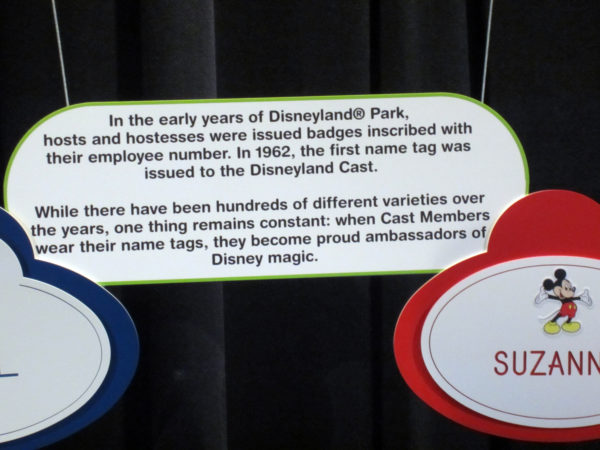 How Disney Nametags are Made (Plus the Secret of Blue Nametags)

If you’ve ever visited a Disney park of any kind, you’ve more than likely seen the iconic Disney nametags. They’re white plastic plates of a pretty significant size with the Cast Member’s first name and hometown engraved on them. But how are they made and what is the significance of them?

The Disney nametags, like many other things in Disney, can be traced all the way back to Walt Disney himself. He believed that calling Cast Members by their first names was important for establishing a family-friendly atmosphere. Since there were so many Cast Members even when Disneyland opened, they had to wear nametags because remembering names was impossible.

Today, Cast Members’ nametags allow guests to also call them by name but, even more than that, recognize them. Kids are often told to look for a Cast Member if their “parents get lost” (because there are no lost kids in Disney!), and other guests like finding Cast Members who are from their locale.

It’s a ceremonial event when Cast Members receive their nametags. After being hired, they complete a class called Disney Traditions during which they learn everything they need to know about Disney etiquette. Once they’ve successfully completed Traditions, they attend a ceremony where they literally get their ears and their nametags.

Cast Members must always wear a nametag, so if a Cast Member loses his or her nametag, there are always extras. For example, if your name is actually Nicole but you lose your tag, you might have to answer to Sarah for the day.

There’s an Engraving Department located backstage at Walt Disney World where they create all of the nametags for Disney World, including Magic Kingdom, Epcot, Disney’s Hollywood Studios, Disney’s Animal Kingdom, Typhoon Lagoon, Blizzard Beach, all of the Disney resort hotels, and Disney Springs, plus Disney Cruise Line, Walt Disney Imagineering, and more. This amounts to about 100,000 new nametags a year.

The plastic tags, which are already etched with the appropriate location and design, are laid into forms that hold them steady as a laser printer overhead moves very quickly back and forth to engrave the appropriate name into the tag. Then the tags are off to their rightful owners!

Disney Cast Members with blue name tags, which aren’t very common, are those who have won a Walt Disney Legacy Award. Cast Members nominate their coworkers for the award. Nominees are reviewed by a panel that includes Cast Members, managers, and executives. The winners receive their new, blue name tag in a special ceremony. It is quite a honor to receive the award and receive a blue name tag.

Have you ever seen a Disney Cast Member with a blue nametag?