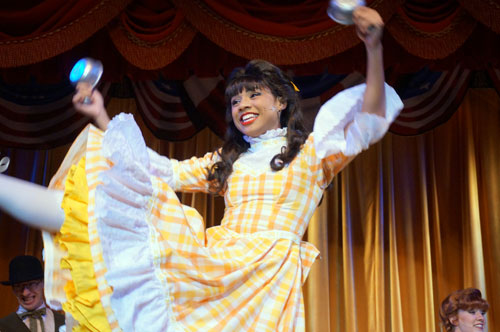 It all started way back in June of 1974. Richard Nixon was president, the Cleveland Indians held a never-to-be-repeated 10 cent beer night that was a not-too-surprisingly a disaster, and the Hoop-Dee-Doo Musical Revue made its first appearance at the Walt Disney World Resort in Florida.

In the beginning, a cast of summer interns put on the show at Disney’s Fort Wilderness Resort. That early start created a legacy which has carried on for a full forty years.

Filled with down-home music, jokes, Americana, and huge helpings of good food, the Hoop-Dee-Doo formula for what makes a great dinner show hasn’t changed much over the years because it works so well.

The show closed briefly at the end of the summer season on 1974. However, it built a strong following in a very short time. Guests wanted more. Disney went searching for a full time cast, and the permanent show debuted on September 5, 1974. It’s been going strong ever since.

Three times a night, six talented Disney Cast Members put on a show that, for many families, is their first introduction to a Broadway-quality performance.

The Hoop-Dee-Doo Musical Revue takes place in Pioneer Hall, an old-time music hall. Guests sing, clap their hands, and stomp their feed along with the show as they share a meal at large round tables.

The menu includes all you can eat salad, fried chicken, ribs, corn, mashed red potatoes, and baked beans. You can also get soft drinks, wine, beer, and sangria, all of which are included in the price of the show.

Disney has changed only one thing about the menu in the past 40 years. Chefs originally served apple pie for desert, but in 1979, they switched over to strawberry shortcake. To serve the hungry crowd each night, Disney uses 15 gallons of strawberries in a sweet sauce to top the shortcake, and then piles on top a total of 12 gallons of whipped cream. When Disney dropped the apple pie in favor of short cake, they had to change the matching musical number in the show. They replaced “Apple Pie Hoedown” with “Strawberry Short Cake Walk”.

The show takes place three times each night: at 4:00pm, 6:15pm and 8:30pm. Whichever show you decide to attend, make sure you allow plenty of time to get to Pioneer Hall at Disney Fort Wilderness Campground. There is no parking nearby Pioneer Hall. You either need to take a boat from the Magic Kingdom, Disney’s Contemporary Resort, or Disney’s Wilderness Lodge, or park your car near the entrance to Fort Wilderness and take a bus to the Settlement.

There are three categories of seating, each with slightly different pricing. Category 1 is on the floor and nearest the stage. Category 2 is in the back or the center balcony. Category 3 is on the sides, either on the floor or in the balcony. The cost for adults is between $57 and $67 (prices as of the summer of 2014 and will likely go up over time).

Is It Any Good?

In my opinion, the Hoop-Dee-Doo Musical Revue is a classic Disney experience and I highly recommend it.  The food is good, the drinks are plentiful and included, and the show is pure corny fun.  The Hoop-Dee-Doo Musical Revue doesn’t take itself too seriously and neither should you.  If you walk in expecting fun and you’re willing to go with the flow, you will definitely have a great time.