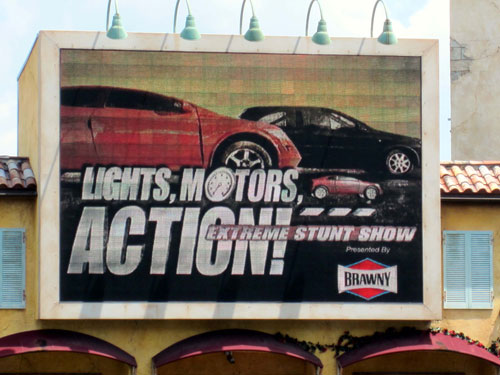 There’s been a lot of buzz going around about Disney’s Hollywood Studios recently, though none of it is very official. There are few things we do know, though.

As the attendance numbers at Disney’s Hollywood Studios recently fell behind Animal Kingdom, more closures are not welcome news (at least in the short term) to guests who are still paying upwards of $100 for a one-day ticket to the park.

The good news is that Hollywood Studios is still ahead of Universal Studios and Islands of Adventure in annual attendance, but the Comcast-owned parks are making huge investments in new attractions and are gaining ground on Disney thanks to the huge success of Harry Potter.

Many attractions have already closed, and two more have recently been added to the list: Honey, I shrunk the kids play area and Lights, Motors, Action! Extreme Stunt Show. Disney has also put up construction walls around all of Streets of America effectively shutting down the whole area. This means that shops, restaurants, character meet & greets, and even the mouse ear water tower (which will soon be removed completely) have all closed – at least for now, and probably forever.

The near future doesn’t look so good for Hollywood Studios. It’s almost like Disney was surprised that the park began to fail. They should have been expecting this with few refreshments to the park and not many new attractions for younger Disney Fans.

All of this is changing though, and in a big way.

Hollywood Studios is in for a huge makeover, so the closures have an up side! The Backlot area including Lights, Motors, Action! will become Star Wars Land, and the play area for the irrelevant Honey, I shrunk the kids movie set adventure will become part of Toy Story Land. When all is said and done, the park will even have a new name, but we don’t know yet what it will be. Both new lands will hopefully bring new life to Disney’s least visited Florida park adding attractions for the whole family and helping it gain stable footing once again.

What to do now

All of these changes will take several years to complete. The New Fantasyland in Magic Kingdom also saw construction walls for quite a long time, but Magic Kingdom offered many other attractions to entertain guests. Therefore, the Fantasyland construction period didn’t have a huge impact on the park as a whole.

The same cannot be said for Hollywood Studios.

The wait times on headliner attractions are likely because there are fewer things to do. As of my last count, there were actually only five “ride-based attractions” at the park: Star Tours, Rock ‘n’ Roller Coaster, Tower of Terror, Toy Story Midway Mania, and the Great Movie Ride. Of course, there are still plenty of shows and live entertainment, but the options are shrinking right now.

Many people already stayed at Hollywood Studios for just a half-day, stopping by to ride Rock ‘N’ Rollercoaster, Tower of Terror, and Star Tours, and then taking in a few other shows.

Until the park makeover is finished, will Disney be able to offer more than movie sneak peaks and Star Wars add-ons to keep guests coming through the gates?

How long will all of this construction take?

There’s some fun concept art on the construction walls, but no clear timeline has been released. Until then, we wait.

Is Hollywood Studios still worth visiting?  Will you go during your next vacation?