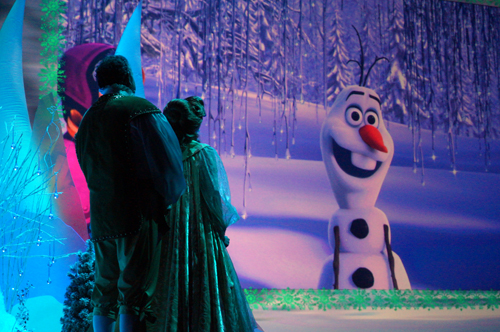 Hollywood Studios: Has It Been Reduced to a Half-day Park?

There have been so many closures at Disney’s Hollywood Studios that many guests may now be tempted to avoid the park all together.

However, many of the attractions that have closed were losing ground in the popularity polls anyway.

While today’s Hollywood Studios is not a destination to build your vacation around or even a must-do on your vacation, it still has many attractions that are a good way to spend your valuable time in Disney.

In fact, if you’ve never visited Hollywood Studios before, it wouldn’t be hard to plan a full-day visit to this park.

Let’s take a look at some of the fun that still happens today at Disney’s Hollywood Studios:

Disney’s Hollywood Studios is still home to some of the most unique attractions in Disney World.

Twilight Zone Tower of Terror invites visitors in for an unforgettable ride reminiscent of Halloween Night in 1939 when five hotel guests disappeared in the doomed hotel elevator. This attraction, which combines immersive theming with a unique thrill ride, was recently ranked by a panel of experts as the single best attraction at Walt Disney World.

The Studios is also home to some incredible shows including the Nighttime Spectacular, Fantasmic, which continues to pack the amphitheater for every show. Beauty and the Beast is also an amazing show that retells the whole story in a span of 20 minutes. Another great show is Muppet*Vision 3D, which is open throughout the day.

Don your 3D glasses for Toy Story Midway Mania as you use the ride vehicle’s guns to shoot at moving targets in this family-friendly ride which is so popular that Disney is expanding its capacity.

Hollywood Studios is also home to Rock ’n’ Rollercoaster, the only ride in Walt Disney World with inversions.

Until the Norway Pavilion renovations are complete, Hollywood Studios is the official home of Frozen.

Check out Frozen Summer Fun with its parades, dance parties, and even the Frozen Fireworks Spectacular. Am I doing my math correctly? Does that mean two Nighttime Spectaculars in one park? It sure does! If that’s not enough Frozen for you, join the Frozen Sing-along Celebration called For the First Time In Forever. It’s not a groundbreaking show with high-tech features, but it is effective for the intended audience.

Hollywood Studios also plays host to some exclusive opportunities including Disney Junior- Live on Stage, Character Meet and Greets for Doc McStuffins, Sophia the First, and Handy Manny in the Animation Courtyard, and Hollywood & Vine where your little ones can get some play time with Disney Junior Pals during the Character Dining experience for Breakfast, Lunch, and Dinner.

Another important attraction that is exclusive to Hollywood Studios is everything Star Wars. Although this area will be changing with the recently announced Star Wars Land coming, guests can currently experience Star Tours, a 3D space flight into the world of Star Wars, and the ever-popular Jedi Training Academy.

In addition to the Hollywood & Vine Character Dining experience, there are a few other options you’ll find only in the Studios. Hollywood Brown Derby transports guests back to the Golden Age of Hollywood and consistently offers excellent food including the popular Cobb Salad, Jumbo Lump Crab Cakes, and Fettuccine Alfredo.

If a unique atmosphere is more your thing, check out the 50’s Prime Time Café that looks like a 50s house complete with the black and white checkered floor and old décor or the Sci-Fi Dine In Theater, which takes guests back to the classic 50’s drive in setting. Curl up next to your main squeeze and enjoy these unique restaurants that are only found in Hollywood Studios.

If you’ve never seen the Streetmosphere improv performers known as the Citizens of Hollywood, you are missing out! They roam up and down Hollywood and Sunset Blvd giving impromptu performances. Since these performances require audience interaction and even participation and are largely driven by this, the shows are always different. Last time I visited the Studios, I saw a performance of The Nightmare Before Christmas, which was highly entertaining and very well done.

Given all the closures, do you think Hollywood Studios is still worth the time to visit?
Leave your comments below.