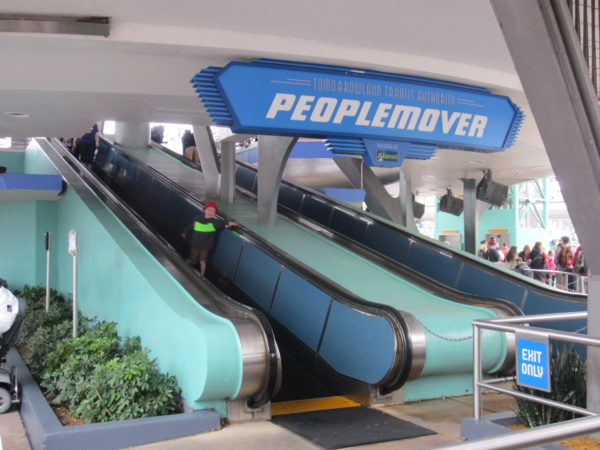 The History of the PeopleMover: Celebrating 50 Years

What we know today as the Tomorrowland Transit Authority PeopleMover started as just the PeopleMover in Disneyland on June 28th, 1967. This year marks the 50th anniversary of this classic Disney attraction that is beloved by many fans.

Let’s take a look back at the history of the Tomorrowland Transit Authority.

When the PeopleMover opened in 1967 in Disneyland, it was sponsored by Goodyear Tire & Rubber Co. of Akron, Ohio and the track was powered by more than 500 Goodyear electric drive wheels between the tracks. Goodyear also provided a conveyor belt that lifted riders to the second level boarding platform. This 15-minute trip was first designed by WED (Walter Elias Disney) Enterprises as a smooth running attraction with narration broadcast in each car as riders pass points of interest over the three-quarter mile route.

The PeopleMover was billed as the future of transportation because the 62 four-car trains were virtually silent even while moving at a steady pace of seven miles per hour. Richard DeYoung, Goodyear Chairman and CEO, was optimistic about the possibilities of their attraction especially for short distances. In the airports, the trains could shuttle flyers between the terminals and parking lots. In industrial complexes, shopping centers, and colleges and universities workers, shoppers, and students could be moved quickly from one place to another; and in cities, the trains could reduce annoying traffic headaches.

Disneyland seemed to be a bit of a trial for the PeopleMover, and with a capacity of 4,885 people per hour, it seemed like DeYoung’s vision was viable.

Sadly, the PeopleMover never took hold in commercial markets, and it closed in Disneyland in the early 1990s.

A modified version of the PeopleMover, known as the WEDWay PeopleMover, opened in Magic Kingdom‘s Tomorrowland in 1975.  The original Disney World attraction was not sponsored by Goodyear since it didn’t use the original propulsion system but instead used linear synchronous motors. Therefore, it was sponsored by Edison Electric Institute.

The Disney World version of the PeopleMover was also different from the Disneyland attraction in that the cars were designed in an opposite fashion: the Disney World cars were open-air with a ceiling covering the track where as the Disneyland cars had a ceiling and an open track. Jack Wagner, a recognizable Disney voice, provided the first narration, but he was replaced with the ORAC One: The Commuter Computer, which was used until 1994.

This attraction ran almost unchanged for the next twenty years until it received an update and became Tomorrowland Transit Authority in 1994. At this time, the TTA received a massive refurbishment, and the theme of the whole land changed from future technology to the city of the future.

Changes included a new track, new name, and new narration by Pete Renaday from TTA Central. Finally, the backstory was changed. The narration now referenced three different lines; the Blue Line, which was the actual ride, the Red Line, which supposedly took riders off-planet, and the Green Line, which provided local transportation to the Hover-Burbs. This story was backed up by a diorama of where all of the lines connected in the second floor of the north show building known as the Interplanetary Convention Center. The updates debuted on June 12, 1994.

Again, it was largely unaltered for the next 15 years with the exception of some narration changes in 1996 when Delta Dreamflight became Take Flight and again in 1998 when Take Flight became Buzz Lightyear Space Ranger Spin. In 2004, FedEx dropped their sponsorship of Space Mountain, so they were removed from narration. The final changed came in 2006 when Timekeeper was closed and it was removed from narration.

In 2005, Alamo Rent a Car became the sponsor for the attraction, and to this day it’s the only Magic Kingdom attraction to retain a corporate sponsorship. However, they don’t have a VIP lounge like many sponsors in Epcot do, and they’re not mentioned in the attractions narration. The only sign of sponsorship are the placards in the queue.

On April 19th, 2009, the TTA shut down for five months while Space Mountain received some significant renovations. The TTA and Space Mountain ride systems run independently, so one can continue to operate even while the other is down, but Disney shut down both rides due to potential safety risks. During this time, the beamway was enhanced with new LED lighting, the track and infrastructure was repainted, and new speakers were installed. When it reopened on September 12, 2009, new narration provided by Mike Vrassel now referenced Stitch’s Great Escape and Monster’s Inc. Laugh Floor and included some commentary from characters represented in each attraction. It was very similar to the original WEDWay narration. It was also officially titled The Tomorrowland Transit Authority PeopleMover.

Today, the TTA PeopleMover is a beloved classic attraction for many reasons including the leisurely pace, short wait times, and the cool breezes provided on the second level of Magic Kingdom. You also get unique views of attractions including the Astro Orbiter, the Tomorrowland Speedway, The Carousel of Progress, Buzz Lightyear Space Ranger Spin, and Space Mountain. In fact, the TTA is famous for offering the only accessible view of Space Mountain with the work lights on. You can also see high above Fantasyland, Mickey’s Star Traders, and the original concept model for Walt’s Experimental Prototype Community Of Tomorrow.

Are you a PeopleMover / TTA fan?