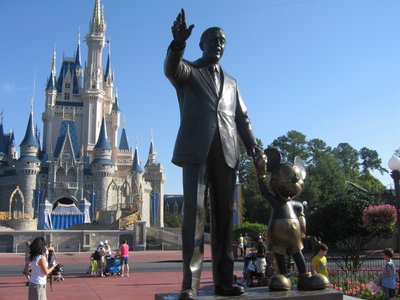 If you asked ten people the first thing that comes to mind when they think Walt Disney, you may get ten different answers. Possible replies include Mickey Mouse, roller coasters, cartoons, or The Mickey Mouse Club. Maybe they think about the musical soundtrack of their childhood, or even the huge global corporation that makes it all happen.  But what about the man behind the mouse?  The artist and dreamer who started it all?

The work of Walt Disney – the man – is varied and encompasses many aspects of the entertainment industry. For all that people do know about Walt Disney, there is much that most probably do not know.

Walt Disney was born on December 5, 1901 and grew up in Missouri. From a very early age, Disney knew that he had a talent and desire to draw and he took every opportunity to find ways to improve his skills in this area.

He tried to join the military in 1918, but he was too young. He found another way to help by joining with the Red Cross. He spent the next two years as an ambulance driver. While there were plenty of emergency vehicles in the area where he worked, Disney’s ambulance was easy to spot: it was the one covered in his cartoon drawings.

When he was done with his service he began a business producing movies for small businesses. All the while he continued to work on his animations, but his company soon went bankrupt. Still, Disney was not one to quit. Working together with his brother, Roy, the pair finally sold a movie called Alice in Cartoonland.

Of course, no one could have imagined the impact that Disney would have on the entertainment industry, and on the world. He married Lillian Bounds in 1925 and raised two daughters named Diane and Sharon.

It All Started With A Mouse

A few years after he was married, Walt Disney created Mickey Mouse. While most think Mickey’s first film was Steamboat Willie, it was actually Plane Crazy. Plane Crazy was a silent film, but before it could be released “talkies” were introduced so Disney gave Mickey a speaking role in Steamboat Willie. This was the very first time that a cartoon with synchronized sound was released – a major innovation in entertainment technology. It would not be the last time that Disney had a hand in major innovations in the movie industry.

Because Disney owned a two-year patent for Technicolor, no one else could produce color cartoons during that time. His 1932 work, Flowers and Trees, earned him an Academy Award. Snow White and Seven Dwarves was the very first full-length musical cartoon. It was released in 1937 with a price tag of $1.5 million, which was staggeringly expensive for that time.

By the time Disney opened his studios in Burbank, California he had more than 1000 people on payroll. During World War II, he did a lot of work for the government by producing training and health videos, some of which are still being used.

Disney was an innovator in television just as he was in film. He was the very first to bring color to television with his show called The Wonderful World of Color.  Another Disney show, The Mickey Mouse Club, was a huge hit and versions of the show are still being produced.

In the middle of all of his success in television and film, Disney found time to create a California theme park called Disneyland Park. When he decided that he wanted to open another theme park, he knew that he wanted it to be much bigger than the first.

The History of Walt Disney World

Once Disney decided where to build his new theme park, he chose to buy the needed land in a way that would not draw the attention of the press. He wanted to be sure he could acquire all the land he need before word got out and the price of the land skyrocketed.  He was able to purchase about 27,000 acres using names of various corporations that he established. In 1967, the press learned the truth about who had bought all of that land and Disney gave a press conference.

One of features of his plans that he highlighted during the press conference was Epcot. Most people now think of Epcot as one of the four theme parks located in Walt Disney World, and that’s what it is now. The original plan for EPCOT, however, was quite different.

Disney felt that there were serious problems with the quality of life for people who lived in cities. He felt that most of these problems were easily fixable and set out to prove it by building EPCOT, Experimental Prototype Community of Tomorrow. Disney envisioned a community that made the most of new available technologies and that was ever-evolving as more new advances in technology were made.  It would be a place where people actually lived and worked.

While Disney’s original dream for EPCOT never came to fruition, a model of the plans can be seen on the Tomorrowland Transit Authority (also known as the People Mover), located in Disney World’s Magic Kingdom.

Walt Disney died in December of 1966 before construction could begin on the Florida park, so his brother Roy took over. Roy O Disney managed to gain permission to form a special district that included two cities: City of Bay Lake and City of Reedy Creek. Because these were distinct cities, Disney was able to sell bonds in order to help fund construction of the park. They also formed local governments that sped the regulatory process – a move that many see as controversial in hindsight since, in effect, Disney controls their own form of local government that oversees the property.

A Legacy Of Family Entertainment

Disney World Resorts is the largest in the world, and it is ever changing. When the park first opened in 1971, there was only one theme park, Magic Kingdom. EPCOT opened, not as a city but as a theme park, in 1982. Disney’s Hollywood Studios followed in 1989 and the latest addition, Animal Kingdom, made its debut in 1998.

Other Disney resorts have been built in Tokyo, Shanghai and Paris. Disney also took their good times out to sea with the introduction of the Disney Cruise Line in 1998.

Walt Disney is engrained into the pop culture in many ways. His movies, television shows and theme parks continue to enthrall and entertain millions of people all over the world. It is difficult to imagine what life would be like without the contributions and Imagination of Walt Disney.