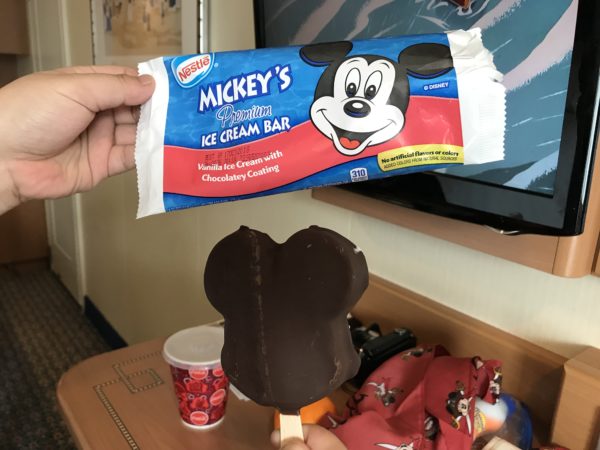 History Of The Mickey Bar: The Recognizable Disney Staple

There are some things that have become synonymous with the Disney Parks. The castles, Main Street USA, and Fantasyland are just a few of these instantly recognizable sites. When it comes to snacks, there is one Disney treat that stands above the rest: Mickey’s Premium Ice Cream Bars, or simply, the Mickey Bar!

No matter where you stroll in any of the Disney Parks, you’ll see an ice cream cart selling the Mickey Bars around every corner. Until recently, the only place to get a Mickey Bar was in a Disney Park, resort, or cruise ship making it one of the most sought-after sweet treats. The Mickey Bar has a huge following, but when and how the craze for the frozen Mickey confection started is a mystery for most fans.

The Mickey Bar has such a strong following that you would think the product had been around since Disneyland’s opening in 1955, but, in reality, the product didn’t get to the park until the 1980s. Although it wasn’t until the mid-80s when the bars were introduced, there is still a hint of Walt Disney in each one of the bars. Of course, the first thing you notice when you open a Mickey Bar is the chocolatey outline of Mickey Mouse’s ears, but there is also a nod to Walt in each bar.

In the 1950s, it was not uncommon for popsicles and other frozen treats to be on a stick that was rounded and had a bit of a point. As Disneyland was in development, Walt became obsessed with the details (much like in his films). One of the things that caught the attention of Walt was that a rounded popsicle stick could cause guests to trip and fall. To avoid this hazard, Walt requested all popsicle sticks be made flat. Today, you will notice that all Mickey Bars are attached to a wide/flat popsicle stick – a standard in the industry now.

It is believed that the first Mickey Bar-like treat was introduced to the parks in 1985. Nestlé, who produces the Mickey Bars, has made some changes to the treats since they were introduced. According to our research, the bars were first a simple oval shape.

Then, in the 1990s, the bars took on more of a Mickey Mouse shape. There have also been changes to the flavored ice cream used in the bars. When the bars were introduced with their new Mickey shape, the ice cream was a combination of chocolate and vanilla flavors. Today’s Mickey Premium Ice Cream Bar looks a lot more like the treats you see on social media or the ones marketed in Disney’s consumer products. The chocolate ice cream was traded in for an all vanilla ice cream center covered in a shelled chocolate and of course with a flat popsicle stick.

In the 30 plus years of the treat’s history, the Mickey Bars have gained a significant following. According to Disney, over 3.3 million Mickey Bars are sold each year at Walt Disney World alone. In order to produce that many bars, Nestlé created a facility near Fresno, California to mass-produce the bar. The Nestlé factory produces a total of 170,000 bars per day during a multi-step process that involves heating, cooling, and molding the bars. The ice cream bars are then hand-packed and shipped to their Disney destination.

Until 2019, the only place to purchase a Mickey Bar was on Disney property. Because of the high demand for the bars, coupled with the great marketing ploy of Mickey Mouse’s 90th Birthday, a special edition of the bars was made for grocery stores. When first released, most stores quickly sold out of the bars. As time went on, the novelty of being able to purchase the treats outside of Disney property wore off and now the bars are routinely available in stores. Unfortunately for the diehard Mickey Bar fans, it became obvious that the bars sold in stores were not the same sold in the parks. A quick comparison of the two bars showed minor inconsistencies in the types of milk, chocolate, total count of fat and sugars, and size of the bar itself contributing to feeling that something was off. Feedback on the grocery store Mickey Bar was positive but always came with the caveat that it was no comparison to the ones available in the parks.

Disney seems to always know when they have achieved a cult following on a treat, attraction, or film and inevitably tries to cash in on the popularity. Over the course of the last few years, Disney has created a merchandise line dedicated to Disney snacks labeled Disney Park Treats. One of the stars of the line is the Mickey Premium Ice Cream Bar. Disney created everything from Christmas ornaments, to pillows, and even a Mickey Bar Ear Hat all featuring an iconic Mickey head on a stick.

There is no doubt that social media has played a significant role in what guests of the Disney Parks expect to get out of their visit. Park-goers will always want to see the attractions and parades, but there is a whole new group who label themselves Disney Foodies now frequenting the parks. These foodies’ sole purpose in visiting the parks is to experience all the treats and food offerings that are released, most of them only for limited times. It may be one of the simpler or more common treats, but the Mickey Premium Ice Cream Bar has become a staple in the world of Disney treats that both the average park goer and the Disney foodie can agree on.

P.S. For those wondering, yes, there is a proper way to eat a Mickey’s Premium Ice Cream bar. According to Nestlé, you start with an ear (left or right), and work your way down!