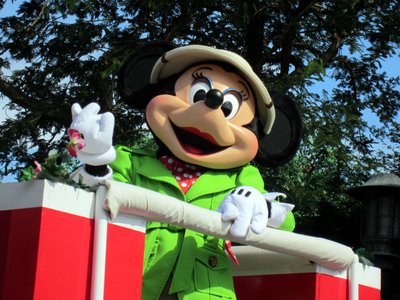 It is, after all, a great idea.  For many kids, and some adults, the opportunity to spend a little one-on-one quality time with their favorite Disney character is a “must do” activity for their Disney World vacation.   Getting that special signature, picture, and hug makes for great memories.

Unfortunately, it can be a hassle to meet characters in the Disney parks.  First you have to track down when and where your favorite will be.  Then you have to wait in line.  And sometimes it is a very long line.  Finally, you get your time, but it goes by very quickly since there are so many other waiting behind you.

Character dining takes care of so many of these issues.  As long as you plan ahead and are able to get a reservation at a Disney restaurant that will host your chosen character, you’ve got it made.  The characters stop by every table and you get some extended face-time – all without waiting in a big line, and while getting to multi-task by eating too.

What genius came up with this idea of Disney character dining?

Like with so many other things, necessity was the mother of invention.  Jim Hill, on his web site called Jim Hill Media, writes a well-researched and very interesting history on how this came to be.  Here is what Jim had to say:

“So – just as a test in December of 1977 – the Walt Disney World Village put together a “Have Breakfast with Santa” promotion. Where kids and their parents would come on board the Empress Lilly (which was completely open and available at that time of day. Given that – at this point in its operating history, anyway – this riverboat restaurant wasn’t serving breakfast. It only served lunch and dinner) and enjoy some scrambled eggs, bacon and pancakes while Santa slowly worked his way around the Promenade Deck and visited with every child at every table.”

I think it truly is fascinating that Disney can take a simple idea from another industry, like a Santa breakfast at  a shopping mall, and add their own characters in. The end result is something far more than a copy. It is something truly extraordinary and magical.  How do we know that?  We just have to look at the result of this promotional test.  What impact did it have on the Walt Disney World Village (what we now call Disney Springs)?  Jim goes on to write:

“To hear Kalogridis tell this story, the “Have Breakfast with Santa” promotion was a huge seasonal success. Resulting in huge foot traffic through the stores. More importantly, an overall increase in sales at the Walt Disney World Village at a time of day when this retail and dining area was usually dead.”

If you visit Disney World today, you will find character dining and literally dozens of locations in the theme parks and resorts – all delighting guests and bringing in big bucks.  It’s a good life lesson:  take what works, make it special in your own way, and run with it.

What Is In A Disney Name

This article has a mix of seemingly unrelated facts and stories that all come together under the general topic of character dining.  For example, the article also talks about how many guests to the Disney World Resort in the early 1907s did not understand that the “Lake Buena Vista Shopping Village” (the original name of the shopping district that later became the Walt Disney World Village and eventually Disney Springs) was actually part of Walt Disney World. They thought it was just another strip mall.

I guess that explains why Disney always puts the word “Disney” in front of the official name of just about everything they promote. While it seems to make perfect sense today, it must have been a hard lesson for Disney management and marketers to learn that people could think that something Disney created didn’t actually come from Disney – unless it specifically starts with the “Disney” name.

It almost makes me wonder why we don’t have “Disney’s Epcot” when we have “Disney’s Hollywood Studios” and “Disney’s Animal Kingdom”.  Maybe time has built up the Epcot brand enough so that it stands on its own – and everyone already knows it is unique to Disney.

For Those Who Love The monorail

One more very interesting point in this article is a photograph of an early model of the Shopping Village.  It shows a monorail line (yes a monorail!) snaking around the buildings near the parking lots.  Apparently there were well developed plans to add a third loop to the monorail.  The first two monorail loops were built – the first being the Magic Kingdom loop and the second being the Epcot loop.  This third loop would have gone from Epcot to Disney Springs.  I wonder what impact that would have had on both Epcot and Disney Springs if that monorail loop were actually built.

If you are a fan of Disney history, you will enjoy this read.  It is well researched and provides history that nearly any Disney fan will find to be interesting “new information.”