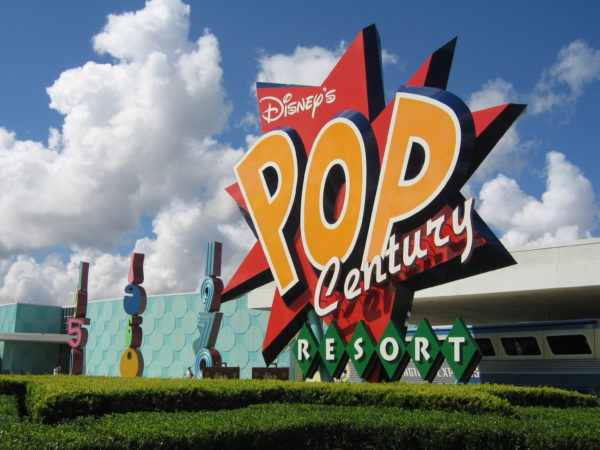 Disney’s Value Resorts may be one of the least expensive resorts on property, and the theming can seem a little cliché, but they are actually really great resorts.

Lots of people go straight to their room and don’t bother to look around.  This is a mistake! Take a walk around the resort, and you just might find yourself getting a history lesson! As you meander down the walkways, you’ll find signs with a year and a fact.

Today, we’re going to take a virtual walk around the resort and explore these facts. The next time you’re at Pop Century, you can take a real tour!

1950: The most popular PEZ dispensers to date are Mickey Mouse and Santa Claus. The comic strip “Peanuts” goes into syndication.

1951: Color TV becomes available in the U.S. Willie Mays starts with the New York Giants and is named rookie of the year.

1952: Comedienne Lucille Ball wins an Emmy for “I Love Lucy.” The show also stars her husband, Cuban bandleader Desi Arnaz. That same year, they sign an $8 million contract, the largest in TV history.

1954: Dr. Jonas Salk licenses his polio vaccine. In Brown vs. the Board of Education, the U.S. Supreme Court rules against segregation in public schools.

1955: DISNEYLAND opens in Anaheim, California. (On July 17!) The word “smog” is first used to describe the combination of smoke and fog that hangs over U.S. cities.

1956: A record 54 million TV viewers tune into “The Ed Sullivan Show” to see Elvis Presley, who tops the charts with “Heartbreak Hotel”, “Don’t Be Cruel”, and “Blue Suede Shoes.”

1957: Utah becomes the last state on the Navaho Nation to give voting rights to Navahos. Frisbee disc throwing sweeps across U.S. college campuses.

1959: Alaska and Hawaii are admitted to the U.S. Frank Lloyd Wright’s creation, the Guggenheim Museum, opens in New York City.

1960: 10,000 screaming teenage fans greet the Beatles when they land at JFK Airport in New York City. The Fab Four then perform live on “The Ed Sullivan Show”.

1963: In the largest civil rights demonstration to date, Dr. Martin Luther King, Jr. delivers his “I Have a Dream” speech. Kodak launches the instamatic camera.

1965: Chubby Checker’s number one hit, “The Twist”, sets off a dance craze. Miniskirts are shown as haute couture at the fashion houses of Dior and Courreges.

1969: Astronaut Neil Armstrong steps out of Apollo 11 and walks on the moon. Woodstock Rock Festival opens in Upstate New York.

1972: “Pong”, the first video game, is introduced to the public. The Miami Dolphins go undefeated and win the Super Bowl.

1973: The Sears Tower in Chicago opens as the tallest building in the world.

1982: The Vietnam Veterans Memorial, a black granite wall, inscribed with names of more than 58,000 who died in Vietnam, is dedicated in Washington, DC.

1983: The last episode of M*A*S*H draws the largest audience for a single TV show: 125 million viewers.

1986: $1.1 million is paid for a one minute TV ad on the Super Bowl. The federal budget deficit reaches $2 trillion.

1987: Engineer, Scott Stillinger invents the Koosh Ball to teach young kids how to catch. The name comes from the sound the ball makes.

1991: A sheet of the original first printing of the Declaration of Independence, found at a flea market in the backing of a painting, sells for $2.4 million.

1993: Beanie Babies are born. The National Science Foundation increases the amount of data that can be transmitted between computers in a second, and everyone starts surfing the Net.

1994: “The Lion King” roars into movie theatres. “Forrest Gump”, starring Tom Hanks, is released and wins an Oscar for Best Picture. The movie spans the ’50s through the ’90s.

1996: Toy Story is released. It was the first feature-length film animated entirely by computer.

1997: Rock star Elton John’s “Candle in the Wind,” a tribute to Marilyn Monroe in 1970, is revised in memory of Princess Diana and becomes the best selling single of all-time.

1999: As the year 2000 approaches with a wink 😉 and a smile :), the world awaits Y2K and prepares itself for the various perceived challenges.

Do you enjoy the history signs at Disney’s Pop Century?