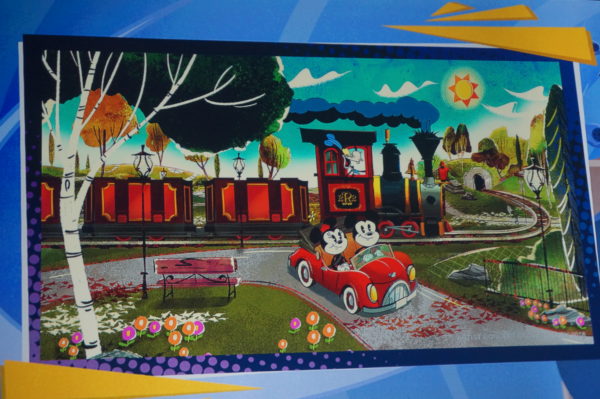 The History and Future of 3D Attractions at Disney World

The technology that allows us to see films in 3D has been around in some form since the early 1900s but they really became popular in the 1950s and again in the 1980s and 1990s. As technology evolved, 3D films became more successful in the 2000s with Avatar, released in December 2009 when it became the highest grossing film of all time.

Today we’re going to take a look at the history and future of 3D attractions in Disney World starting with an honorable mention and going forward to the anticipated Mickey and Minnie’s Runaway Railway!

The first Walt Disney Studios 3D film Melody, was released way back on May 28, 1953, but the company didn’t really do much else with 3D film until 1986 when Michael Jackson starred in Captain EO.

This film, which required 3D glasses, was produced by George Lucas and ran for a total of 15 years in Epcot‘s Future World Journey into Imagination pavilion with its main showing from 1986 to 1996 and an encore performance in 2010 to honor Jackson’s death and closing in 2015.

The film cost an estimated $1 per minute, making it one of the most expensive short films ever on a per-minute basis.

The science fiction story included two songs written and performed by Michael Jackson as he and his alien crew attempted to deliver a gift to The Supreme Leader. Besides being one of the first 3D films Disney released publically, it is also considered the first attraction to include 4D effects like lasers and smoke in the theater synchronized with the film.

This attraction, which is on our list as marking the history of 3D in Disney World receives honorable mention since it is no longer playing.  This is the case with Body Wars, an Epcot attraction that used a similar set of technology.  However, they say that in order to know where you’re going, you have to know where you came from.

It didn’t take long for Disney to realize that they were really on to something with the 3D attractions. They take up significantly less space than moving attractions, and the crowds loved the new technology.

Disney wanted to design their own live-action film, which they called The Black Hole, and sync it with a ride simulator, but this idea was cost prohibitive. Since Star Wars was similar to their idea, and it already had a fan base, Disney began talking to George Lucas, who created Star Wars and had already worked with Imagineers on Captain EO. This partnership, though, meant that Star Tours would be the first attraction in the parks based on non-Disney Intellectual Property. Little did they realize then that Disney would later own the IP rights to Star Wars.

Lucas created a first-person perspective film while Disney worked on modifying a flight simulator, one of four military-grade flight simulators Disney purchased at a cost of $500,000 each. This purchase, however, meant that they didn’t have to waste time designing and constructing such ride vehicles. Then a programmer sat inside the simulator with a joystick to synchronize movement of the simulator with the movement on screen. When the ride was completed in Disneyland in 1987, it cost nearly twice as much as the entire park construction cost in 1955.

In the original version of Star Tours, riders were sent to Endor. On the way there, you were caught in a galactic battle between the Rebel Alliance and the Galactic Empire. When the lights go off in the simulator and the film turns on, it’s like you’re really flying through the Star Wars Universe. In 2010, Star Tours – The Adventures Continue replaced the original version with a new story line to fit the newest movies in the saga. However, the idea remained the same.

While this is a really cool use of 3D, the movement of the simulator with the perceived movement on screen and the use of 3D Flight Glasses can induce motion sickness for some. Many guests have reported that simply removing the glasses solves the issue without taking too much away from the experience.

Ironically, this 3D film is actually about the Muppets creating a new 3D film technology. The attraction queue introduces this idea as guests walk through a kind of movie production set with props and boxes. This is where you pick up your 3D glasses. Throughout the show, there are lots of 3D gimmicks like when Fozzie Bear opens a can of springs or sprays water from his boutonniere.

The Muppets “create” the world’s first computer-generated Muppet, which they call Waldo C. Graphic. From this point on, the 3D tricks are completely outlandish as Dr. Honeydew and Beaker lose total control of Waldo. Fozzie returns, Miss Piggy is introduced, and Sam Eagle also appears all with crazy 3D effects.

In addition to the 3D film, there are also 4D effects in the theater including audio-animatronics of Waldorf and Statler, lighting, projections, smoke, bubbles, and a full-bodied performer who appears live in the theater.

This is a unique show because it pronounces the 3D effects. Other 3D shows in Disney World use 3D as an enhancer to the show, but The Muppets call your attention to the effects.

It’s Tough to be a Bug

Seven years later, Disney’s Animal Kingdom opened. This park is unique in Disney World because it focuses less on attractions and more on animals – especially our relationship with them and conservation of their habitats.

It’s Tough to be a Bug contributes to this goal by showing viewers why we should consider bugs friends instead of, well, smashing them. There are some really cool 3D effects in this show like a giant fly swatter that looks like it’s going to swat the audience members. Other 3D effects include bugs flying around, and Flik, who hosts the show, says you’ll see more bugs with your “Bug Eyes” (3D glasses) than you would without them.

It’s Tough to be a Bug was the first Pixar attraction in any Disney Park, and it was an opening day attraction in Disney’s Animal Kingdom. However, Animal Kingdom opened on Earth Day in 1998, and A Bug’s Life didn’t debut in theaters until Thanksgiving Day the same year. This means that the show at Animal Kingdom began a full seven months before the film!

Mickey’s Philharmagic opened in Magic Kingdom‘s Fantasyland in 2003 as the fourth attraction to be housed in this building.

Over the next 12 minutes, guests are treated with an amazing 3D show displayed on the largest 3D screen ever built at 150 feet wide with some 4D effects sprinkled in.

The film plays some of your favorite Disney music from movies like Fantasia, The Little Mermaid, Toy Story, Beauty and the Beast, Lion King, and Aladdin. Because of the link to Disney’s animated films, Disney Imagineers collaborated with Walt Disney Animation Studios.

By the end of the show, frustrations between Donald and the instruments is at an all-time high, and a very angry Donald Duck is launched out of a tuba through the theater and into the back wall eventually falling through.

Toy Story Midway Mania! opened in Disney’s Hollywood Studios in 2008 and has remained a very popular attraction for the last decade. Just this year, Toy Story Land opened with Toy Story Mania! as the land’s e-ticket attraction. In fact, the ride is so popular, that Disney added a third track to the existing attraction to add capacity, and wait times are still very long.

So don your Carnival Goggles (3D glasses) and load the whole family (up to eight people) into the arcade ride vehicle. Throw eggs with Hamm and darts with Rex and Trixie. Pop balloons with Bo Peep’s Baa-loon Pop, and shoot suction cups at targets in Woody’s Rootin’ Tootin’ Shootin’ Gallery. Each game has fun 3D effects that make them so much more fun!

Don’t forget to check your score on your onboard display before you leave! Who won?

Disney’s Animal Kingdom opened a massive expansion called Pandora – The World of Avatar in 2017. The e-ticket attraction in this area was Avatar Flight of Passage.

Flight of Passage allows humans to enter Pandora via the Alpha Centauri Expeditions, who reactivated the avatar program, and establish a connection with a banshee, which was only possible for Na’vi before now.

This ride is unique because you actually board an individual ride vehicle that is a lot like a bike. However, it’s a very similar experience to Soarin‘ at Epcot in that the ride begins with a great reveal into a screen that displays a video. The difference is that you’re wearing 3D glasses, which makes some guests feel like it is similar to Star Tours.

You’re actually in a 3D flying simulator that works kind of like an elevator that moves your ride vehicle up and down while you’re flying through Pandora. This ride is so complex that it took five years to develop, but all of the footage is original. This is truly a next-level 3D attraction.

Flight of Passage was the last 3D ride that Disney debuted, and their use of 3D might be changing since some parks are abandoning 3D for higher-quality 2D.

Universal Studios has already created a ride using HD 2D technology, which isn’t new but has been greatly improved in recent years. Universal’s attraction has a Fast and Furious theme, and it follows a high-speed chase through San Francisco. It feels very real, like 3D, but you don’t have to wear glasses and you can look at any angle and see everything happening around you without layers being distorted like they would be in 3D.

A ride will open in Disney World very soon that may just use the same 2D technology. Mickey and Minnie’s Runaway Railway is slated to open in 2019 in Disney’s Hollywood Studios in the Chinese Theater, which formerly housed The Great Movie Ride.

Disney says that they’re “inventing new technologies that turn the flat world of colorful cartoon shorts into a dimensional display of amazingness.”

So far fan’s don’t seem as focused on Runaway Railway, but Imagineers say Runaway Railway is one of the boldest things they’ve ever attempted.  They’ve already released some really cool teaser pictures of the ride vehicle which is 3D but painted to look like it’s 2D.

Mickey and Minnie’s Runaway Railway could be the future of 3D at Disney World!