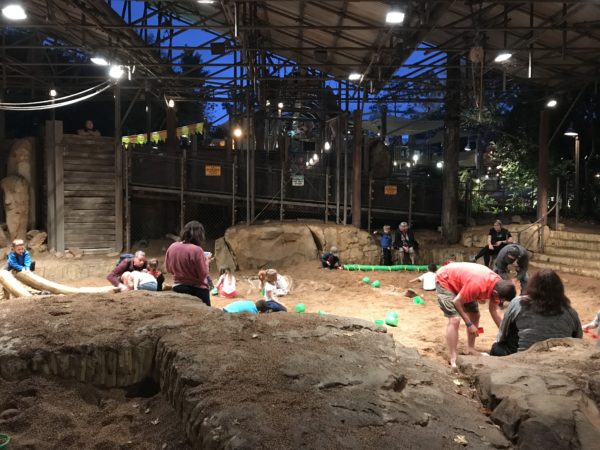 We recently returned from our son’s first trip to Disney World. We had so much fun, and we found a lot of things along the way that we haven’t experienced before on our adults-only vacations.

Our son, “E”, is a very active nearly three-year-old boy, and he needs lots of time every day to run free. While he was very good waiting in lines up to 35 minutes, we were intentional about making sure that he had the opportunity for free, unstructured playtime.

We found a few places in Disney World that were less crowded than other areas, and E liked them very much!

Let’s take a look at five hidden gems for kids in Disney World!

I always plan our arrival and departure days as non-park days because I feel like we’re wasting valuable park time if we aren’t available for the whole day.

For this vacation, we spent our departure day perusing the resort hotel. We stumbled upon a couple nice areas to play at Disney’s Art of Animation Resort. We played in the elephant boneyard and the Righteous Reef Playground. E played for hours and loved every minute. In that time, we only came across a total of maybe five other kids. He had almost free reign of both areas, and we liked the chance to sit for a minute while he played!

All of the Disney Resort Hotels have at least two pool areas. Our hotel, Disney’s Art of Animation, had three pools: The Big Blue Pool feature pool, the Cozy Cone Pool, and the Flippin Fins Pool.

It was pretty chilly while we were there, but we did get to swim one day in the Big Blue Pool. It is the biggest pool in all of Disney World, but it wasn’t very busy, and it was really nice for our son because he could walk in and out as he pleased and didn’t require us to hold him the entire time.

While we didn’t swim in the Cozy Cone Pool or the Flippin Fins pool, we did walk by them during our “explore the resort” day, and neither one was very busy. I think many of the guests want to spend their time in the parks, and the pools, while very fun, are not very busy, and thus a hidden gem for families to enjoy!

We kind of stumbled on this one! After three FastPasses in a row, E needed some time to just run around. As we were leaving The Living Seas, we found a play area with a great photo opportunity.

Bruce, the shark from Finding Nemo, is featured prominently at the center, so we snapped some pictures of E inside Bruce’s mouth then let him run around steering the sunken ships and learning about some underwater animals.

What I really liked about this area is there was one way in and one way out of this circular-shaped play area, which meant that we could pretty much let our son, who is a known escape artist and very fast, run free while we took a load (off near the door).

The only thing that could make this area better would be to put in benches around the sides so parents don’t have to sit on the floor.

Tom Sawyer Island gets an honorable mention because we couldn’t actually visit this area during this trip since it was closed for refurbishment. However, I’ve been on the island, which was an opening day attraction in Disney World, and I know that it’s a lot of fun even as adults.

You’ll have to take a log raft over to the Mark Twain-inspired island in the middle of Rivers of America, and once you’re there, there are lots of places to run and hide. Don’t miss Harper’s Mill (a giant waterwheel), Injun Joe’s Cave (a rocky formation with tight passageways), Fort Langhorn (an early frontier settlement complete with an escape tunnel), Potter’s Mill (which offers great views of Rivers of America and Frontierland), and Tom Sawyer Scavenge Fort (a place reserved for children under 12 years old). Areas are connected by suspension bridges, and there are maps along the way to help you navigate the island.

There are rocking chairs on the porch if parents want to relax, but the island is pretty big and kids can end up anywhere. If your children are older and can navigate for themselves, rock away, but smaller children will need to be supervised. They can’t get off of the island, and there are plenty of Cast Members around the island, but they could still very easily get lost especially if they can’t read maps.

The Dig Site inside The Boneyard Playground at Disney’s Animal Kingdom, part of Dinoland USA, was by far E’s favorite place! My husband, dad, and I had a FastPass on Expedition Everest, so my mom, who doesn’t ride rollercoasters, took our son to The Boneyard.

They first played on the numerous slides and the Jeep wreckage, but soon found this hidden gem, which holds its rightful spot as number one on my list!

The Dig Site is designed for children 10 and under and is contained in the back of The Boneyard so there is no way for children to get away from you. My son loves to dig and play in the sand, so I was dreading what I would see when I found out he was there. However, Disney, being the magical place that it is, uses some kind of non-stick pebbles instead of sand so there’s very little mess. Even though it had rained like monsoon style just a few hours before, the pebbles were mostly dry and did not stick to feet or hands. We did have to dump out his shoes (which are required according to the rules of the Dig Site), but the pebbles dumped right out with no problem!

The Dig Site isn’t huge, but there was plenty of space for kids to play, and it wasn’t very busy. There are giant rocks appropriately situated around the site for parents to sit and observe and for kids to climb.

Shovels and buckets are provided, and kids can dig and play as they please. There are giant fossils buried in the area. E had a blast, and we will most definitely return!

Your favorite hidden gem for little kids in Disney World?