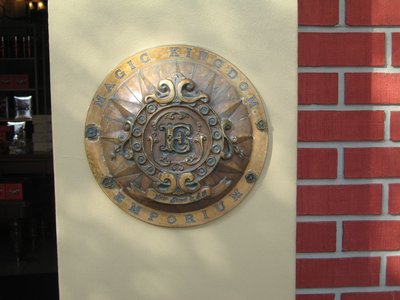 The Small (and Shrinking) Details of Main Street, USA

It has many terrific details that support the stories of the place, but sadly some of those details are disappearing.

No Attractions, But Plenty To See

Serving as the entrance to Magic Kingdom, Main Street, U.S.A. does not feature any of its own attractions. Instead, it is lined with shops, small details, and hidden gems that can provide hours of amusement to those willing to look for them. Space Mountain and Cinderella Castle are breathtaking on a grand scale, but an up close look at Main Street, U.S.A. is one of the best ways to gain an appreciation for the thought and creativity that went into creating every detail of the Magic Kingdom park.

With showy rides and exciting attractions banished to other parts of the park, the Disney Imagineers who worked on Main Street, U.S.A. devoted their time to the period details and personal touches that give the area the feel of a living town square. Each shop was given a back story, while family photographs, proprietor names, street addresses, and other small touches add authenticity to the stories that Disney created for each location.

Some of these names or other details even reference characters from classic Disney films, or Disney legends. The Chapeau Hat Shop, for example, is said to be owned and operated by Nancy and Julia Carey, two characters from the 1963 film “Summer Magic”. This film, with its celebration of small town life and family at the turn-of-the-century, is a perfect fit in the world of Main Street.

The shop was decorated with Nancy’s name on the outside side, and the street address – No. 63 – references the year of the film’s release. Inside were placed family photos as well as twin portraits of the two young women. A full story was also created for the hat shop, detailing how Nancy and Julia set up their millinery, converting a Victorian house into a tasteful place of business. Nancy’s business sense and Julia’s fashion sense were the keys to their success in founding the Chapeau.

These kind of details are what set Disney theme parks apart, and what make Main Street, U.S.A such a special place to explore. However, recent years have seen some of these unique details disappear. Nancy’s name can no longer be seen on the sign outside the Chapeau, and the portraits of she and Julia have gone from the interior. Other shops have seen a similar trend. Details in the Emporium that proclaimed it as a family-owned business have largely gone, and the Confectionary has been cleared of many of the small props that told its story.

There is no official archive of all of the stories around Disney World, so it may be that some of these details are simply fading away as the stories and characters are forgotten by most people. Also, shops that have undergone these subtle changes have mostly placed merchandise where storytelling props used to be, hinting that a need for space proved too much for some nostalgic elements.

Nothing Stays The Same Forever, But…

It can be a bad idea to get too attached to anything at the Disney parks. Attractions close, move, and undergo renovations, and Disney is constantly updating and redesigning elements and areas to reflect changing tastes and new ideas. Walt Disney himself was a strong believer that change is for the better, and that the world is constantly improving over time. Even so, guests who appreciate small and careful details should be sure to devote some time to Main Street, U.S.A. on their next visit before more of these small bits of Disney history disappear forever.