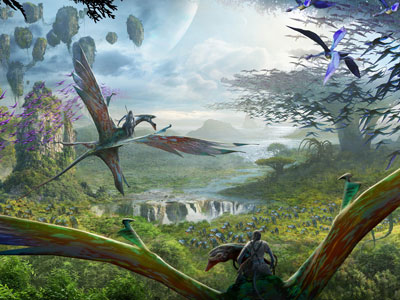 Reasons To Be Happy About Avatar, Even If You Don’t Like Avatar

When you mention the fact that Avatar is coming to Disney’s Animal Kingdom, you get a lot of varied responses from Disney fans.

Some fans think putting an Avatar land in Disney World is a terrible idea. It represents Disney purchasing more stories and characters instead of building them, and it is doing so with a story that only has a track record from a single movie (regardless of the fact that Avatar is currently the highest grossing movie of all time with more than $2.7 billion in earnings, with extensive plans for more movies and expanding the brand).

Other fans say that any time Disney wants to invest in building out new attractions and a new land in Central Florida, it is a good thing.

While Avatar wasn’t my favorite movie, and I didn’t personally necessarily think the characters or the story where all that exceptional, I do think that there are reasons to be happy about Avatar coming to Walt Disney World.

Based in part on ideas from this article, here are six reason why I think everyone should be happy about Avatar, even if they don’t like Avatar. Take a look and let me know what you think by leaving your comments at the end of the article.

Today many people still think, with some justification, that they can see and do everything that Disney’s Animal Kingdom has to offer in a half-day. It’s the old “DAK is a half-day park” complaint.

I like to think that there is a lot to do at Animal Kingdom. It has some great offerings. Expedition Everest is one of Disney’s most innovative and well themed roller coasters. The Festival of the Lion King show deserves its designation as the highest rated show on property, and Finding Nemo The Musical is excellent.  I even think that Dinoland gets a bad wrap – it’s a really cool place with an amazing back story.

Still, from a perspective of how many experiences a park has to offer, Animal Kingdom is near the bottom of the list for Disney Parks.

Up Side: The new Avatar Land is sure to add some new attractions, experiences, and shows to Animal Kingdom.

While Animal Kingdom is designed for nighttime operation, it is rarely open late into the evening. Part of the issue is that all the animals need some peace and quiet. However, this issue ties in closely to the first issue: people don’t stay late at the park because they have usually seen and done everything they want to do before the sun goes down. When there is more to do, people will want to stay later, and they will then get to enjoy the special feel of this park at night.

One of the upgrades to Animal Kingdom that Disney will implement together with Avatar is keeping the signature attraction, Kilimanjaro Safaris, open at night with a different story. I’m not sure how this will work (maybe some animals will volunteer for the night shift?), but I’m looking forward to it.

Up Side: New attractions and bigger crowds will very likely mean longer operating hours, well into the evening, for Animal Kingdom. You will finally be able to see what this park looks like at night.

The Magic Kingdom has Wishes and the Main Street Electrical parade. Epcot has Illuminations. Disney’s Hollywood Studios has Fantasmic. Animal Kingdom? It has no nighttime entertainment. There is no capstone nighttime spectacular to keep people around and justify longer operating hours. However, along with Avatar, Disney plans to include a new nighttime show around Discover River. They will also add roving performers.

Up Side: More big nighttime shows? That’s a good thing.

Even if you still refuse to embrace Avatar and plan to boycott Animal Kingdom for the foreseeable future, you will still benefit from Avatar. The new attractions and shows should help even out crowd levels. This could mean a bit more elbow room in the Magic Kingdom – or so we hope.

Up Side: More capacity at Animal Kingdom means that crowds might be disbursed a bit more evenly. There might be more room in the other parks.

A little competition never hurt anybody, right? If Disney continues to expand then it is likely that the other parks in Central Florida will continue to invest too.

Up Side: You get more choices, which is always nice.

6 – You Can Trust Disney

It is hard to predict exactly what we will see in the new Avatar Land at the Animal Kingdom, but generally speaking I think we can trust Disney to do a good job of taking settings and stories and turning them in exciting theme park experiences. They did a great job with the new Fantasyland, and I think they will do a good job with Avatar too. Even if I’m not a huge Avatar fan, I believe the new expansion will still offer plenty of fun.

Up Side: Even if you don’t like Avatar, there is a good chance you will still enjoy the attractions and new fun that Disney will offer.

Should we be happier that Avatar is coming to Animal Kingdom?