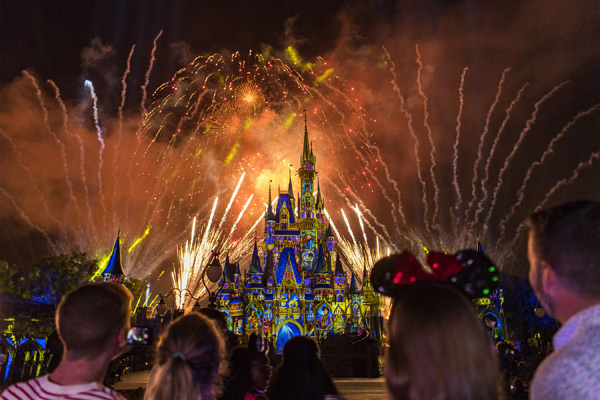 Happily Ever After is a Hit!

Walt Disney World’s newest nighttime spectacular debuted just a few days ago on May 12th, 2017 at 9pm when Disney Parks streamed the show on YouTube. It replaces the long-running Wishes Nighttime Spectacular.

Happily Ever After features state of the art projections with new animations of familiar characters and an original musical score. The theme song also titled Happily Ever After was recorded by up and coming stars Jordan Fischer and Angie Keilhaur.

Happily Ever After is Magic Kingdom‘s new “kiss goodnight.” As with Wishes, the Castle Hub is the gathering place for this show. New lasers and fireworks launch points were added around the castle to accommodate the new show.

The show starts with the theme song. The lyrics, which fit the theme, are set to an upbeat tempo. The story of the show is follows our favorite characters as they pursue their dreams. The new technology brings the castle to life like you’ve never seen before.

Lasers begin the show as the castle is highlighted in shades of blue, pink, and gold, then it twinkles with lights. A narrator says, “each of us has a dream – our heart’s desire.” He goes on to say that the dream calls to us and helps us discover who we’re meant to be. If we look inside, we can unlock the magic of our hearts.

Suddenly, the castle lights up with a keyhole in the door and gold shooting stars. As the theme song reaches a climax, fireworks begin. The first transition involves Tiana from Princess and the Frog, and the music moves to “When you Wish upon a Star.” The next song is “Part of Your World” from The Little Mermaid, which plays simultaneously with “When you Wish Upon a Star.” The next character we see is the Hunchback of Notredame then quickly transitions to Brave when Merida says, “Destiny lies within you. You just have to be brave enough to see it… then your journey begins.” An array of characters follow including Cars, Up, and Finding Nemo as the castle fills with water.

Moana holds a prominent spot as she sings “How Far I’ll Go.” The castle looks like a volcano and the lasers make the sky looks like it’s churning with water. After this section, there’s a slight pause during which much of the crowd applauded.

The next section starts with Aladdin’s “Friend Like Me”, which is mashed up with Toy Story’s “You’ve Got a Friend in Me” and Jungle Book’s Bare Necessities. The animation effects during this time are amazing. The castle looks like it’s bouncing, and characters from Wreck it Ralph, Inside Out, and Monsters Inc. appear. Genie ends the section as the middle of the castle looks like it takes off like a spaceship and the music says, “You ain’t never had a friend like me!” Follows is another lull and applause.

Of course Disney is capitalizing on the Frozen craze; next Olaf says, “some people are worth melting for” then music from “Love is an Open Door” starts: “Say goodbye to the pain of the past. We don’t have to feel it anymore!” Fireworks spray as the music continues perfectly timed. Famous Disney couples and families appear on the castle including Simba and Nala from The Lion King, then “You’ll be in my heart” starts playing while Inside out, Finding Dory, Up, Dumbo, and Zootpia characters play on the castle like a movie screen.

As Aladdin flies in on a magic carpet, lanterns take over the castle. Fans will recognize the lanterns from Tangled as “I see the light” takes over, and the lyrics say, “All at once, everything is different now that I see you.”

Another lull in the show is followed by a period full of villains and chaos. The castle breaks apart and things become stormy. Ursula, Scar, and Maleficient take over and wreck things but then adventure-type music stars. The chaos signifies that things sometimes get crazy in life, but it doesn’t last long.

An image of Mufasa (Simba’s father) appears and he says, “Look inside yourself. You are more than what you have become. Remember who you are. Remember.”, and just like that Aladdin, Tarzan, Mulan, Hercules, and Show White take over and the castle is literally rebuilt.

At the end of the show, the castle is covered in characters and the narrator explains that “our journey comes to an end but yours continues on. Let your dreams guide you. Reach out and find your happily ever after.” This is the point where the story turns on the audience and encourages us to chase our happily ever after.

Music from Peter Pan starts, and Tinkerbelle makes her flight through the sky. The Happily Ever After theme song returns as colorful fireworks light up the sky and the final shot is gold. The sidewalk lights turn on, but the castle stays lit.

The show is fantastic.  There are lots of ups, downs, and rests. This really reflects the story of life and how things go. Sometimes things are high and energetic, but sometimes they’re low and soft. Sometimes there’s nothing going on, and something likes are crazy. There are bad people and bad things, but ultimately good takes hold.

The theme song is pretty catchy, so if you’d like to download it, you can do so in iTunes or Spotify.

Happily Ever After fireworks: A Winner?