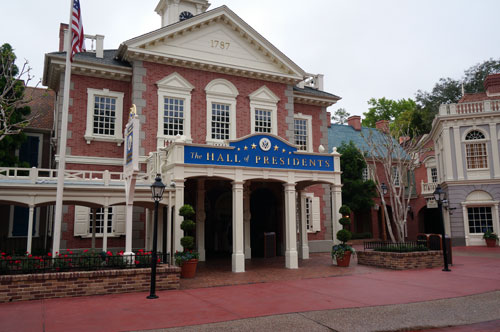 Hall of Presidents gets an Update with New President

The Hall of Presidents in Magic Kingdom‘s Liberty Square is a 23 minute show honoring the life and legacy of each of America’s presidents. It was one of the opening day attractions at Walt Disney World Resort on October 1, 1971, and it’s building is themed similar to Independence Hall in Philadelphia. This attraction dates back much farther than this though.

History of the Hall

Hall of Presidents can be traced back to Disney’s founder, Walt Disney himself.

Walt wanted to create an area called Liberty Street with a theming of Revolutionary-era Philly, and it was to be called “One Nation Under God.” It would include all of the US Presidents and be updated as new presidents were elected. As with other things Walt dreamed up, the technology for such an attraction wasn’t available yet, so Walt put his Imagineers to work to create an audio-animatronic figure of Abraham Lincoln, our 16th president. This would be the first human animatronic created, and it was critical that it looked very real or the whole attraction would be a failure.

Lincoln first appeared in the 1964 World’s Fair in Great Moments with Mr. Lincoln. This attraction in the Illinois Pavilion took place in a theater. The show opened with a pre-show film then moved guests to the main theater where Lincoln was seated in a chair on the stage. With the help of gears, which had never been used before in such an application, Lincoln stood up and gave a brief compilation of his most famous speeches. After the World’s Fair, this attraction was destroyed, but Disney recreated a similar attraction for Disneyland.

As Magic Kingdom was being designed, the Imagineers decided to resurrect Walt’s original plans for One Nation Under God. Instead, it was called Hall of Presidents, and the audio-animatronics were so much better than previous versions.

However, there were still issues. The gears that made the presidents move resulted in rigid actions, occasional spasms, and sometimes the figures would stop moving completely. Once, President Lincoln leaked some gear oil, which stained his shirt red in an unfortunate recollection of his assassination. The imagineers quickly replaced the red fluid with clear fluid to prevent this from happening again.

After decades of running under par, Disney’s David Feinten, who joined the Imagineering team in 1979, created what would be a huge improvement to this popular attraction. His invention made it possible for the presidents to be controlled by a hydraulic system called the Digital Animation Control System (DACS). Now, the animatronics could be programmed allowing them to act and speak in real time. It also isolated body movements so that there wasn’t as much strain on the entire body when single body parts moved. This prevented the animatronics from aging prematurely.

In recent history, Disney has kept the attraction up to date by adding in succession, Bill Clinton, George W. Bush, and Barack Obama. Bill Clinton was the first to lend his voice to his animatronic figure preserving his hard-to-recreate Arkansas accent; Bush and Obama followed suit making this attraction even more realistic. Until Obama, every president was sculpted by famous Disney artist, Blaine Gibson. His protégé, Valerie Edwards, took over sculpting Obama.

When Hall of Presidents shuts down for a planned refurbishment  in January, a new president will be added. President Trump will join the other figures when the attraction reopens in June. Part of the difficulty in creating all of these presidents is not so much in what they say but how they carry themselves and their movements. I can’t wait to see how Disney portrays our newest president since he has some of the most distinct features among the presidents.

Are you looking forward to the 2017 update of the Hall of Presidents?