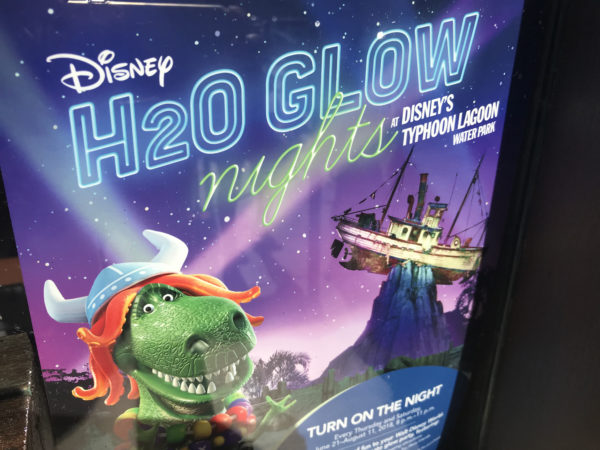 H2O Glow Nights at Disney’s Typhoon Lagoon – What To Expect

Disney World’s water parks often get less attention than the four theme parks, but Disney catapulted Typhoon Lagoon into the spotlight when they lauched H20 Glow Nights at the park in June as part of the 2018 Incredible Summer theme that has taken over the entire resort.

On Saturday, July 28th, I had the opportunity to attend the H20 Glow Nights at Typhoon Lagoon courtesy of the nice folks at Disney Media Relations, and I want to share my awesome experience with you!

In 2012, as part of Finding Nemo 3D, Pixar released a short called Partysaurus Rex. During this short, Rex decides to leave his friends in Andy’s Room for Andy’s bathtub toys, who seem like much more fun. He tries to prove to them and his old friends that he is fun, so he started pouring bubble bath into the water. In the short, the party gets a little out of control and results in a flooded house.

While Typhoon Lagoon was not flooded, it did have a very fun party vibe with Partysaurus Rex as the host and “Dinosaur of Ceremonies”.

There were all kinds of special effects including cool lighting to make the park glow just like the bathroom in the short film.

All night, there were special activities going on throughout the park.

Buzz Lightyear, Woody, and Jessie were available for character meet and greets with less than a 10 minute wait, and PhotoPass Photographers were on hand to snap some great pictures.

The Surf Pool played host to a DJ dance party in the water and along the sandy beaches. Partysaurus Rex was also stationed here all night! Besides music, the DJ and Rex hosted interactive games throughout the evening.

The entire party was kid friendly except for The Wharf area, which is for adults 21+ only. There was special entertainment and adult beverages there, together with a more relaxed vibe than the rest of the party.

If you do have little ones in tow, though, know that this is a family-friendly and kid-friendly event. The whole family can enjoy specialty drinks and food like the party-exclusive Impossible Burger. Unlike the After Hours event at Magic Kingdom that I recently attended, food and drinks are not included in the cost of your ticket, but everything else is!

When can I go?

This special event occurs every Tuesday and Saturday through August 11th. The party begins at 8pm when the park closes, but guests can enter the park and start having fun as early as 7pm. Just don’t forget to show your ticket at the gate to get event bracelet! (As a side note, you should also wear your MagicBand so you can link your PhotoPass photos to your MyDisneyExperience account. If you don’t have a MagicBand or you don’t want to wear it, the photographers will give you a PhotoPass card.)

Is it worth the cost?

H20 Glow Nights offer shorter waits for all of Typhoon Lagoon’s attractions including the water slides, Crush ‘n’ Gusher, Humunga Kowabunga, and the new Miss Adventure Falls. Unlike Disney After Hours at Magic Kingdom, every attraction is open throughout the evening. Similarly to Disney After Hours, the park is more relaxing with much lighter crowds.

If you’re afraid that you can’t enjoy a water park as much at night, you’ll be happy to know that the water slides and pools feel just as refreshing as during the daytime! It’s still very warm late into the summer evenings in Florida.

The only downside to these nighttime parties is that they happen late at night (though this one isn’t quite as late as Disney After Hours), and some younger kids might have trouble staying up past their bedtimes!