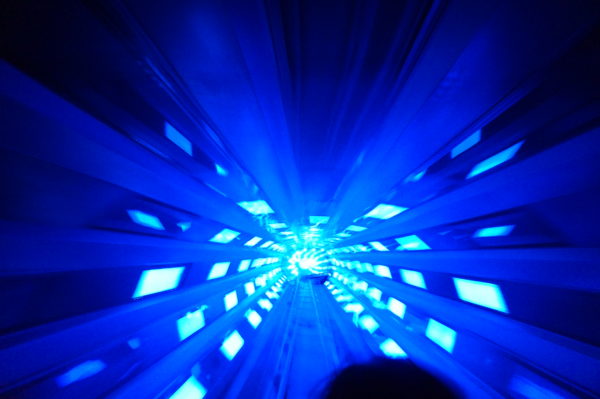 The Ultimate Guide to Tomorrowland in the Magic Kingdom

Walt always had an interest in the future. This was evident in his creation of Tomorrowland as an integral part of Disneyland, and later in the Magic Kingdom in Disney World.

Tomorrowland was supposed to provide a glimpse into the future, but time often moves faster than construction, so it’s difficult to keep up with “the future”.

Most recently Disney has employed a science fiction theme for the land including aliens, monsters, and rocket ships.

Tomorrowland has gone through many changes over the years. It was part of opening day in the Magic Kingdom, but it was hardly finished. There were only two attractions on opening day – Grand Prix Raceway, and Skyway to Fantasyland – neither of which exist in the same form – or at all – today. The first incarnation was finished in 1973, and things have changed and developed since then.

From the very beginning, the land has included attractions and dining, so let’s take a look around the Magic Kingdom’ Tomorrowland as it exists today!

Tomorrowland is a conglomeration of Disney classics and new attractions that reflect Disney’s modernity. Some attractions in Tomorrowland can be traced directly back to Walt Disney himself, and others recognize Disney’s recent acquisition of Pixar.

Tomorrowland Speedway is a rendition of the original Grand Prix Raceway. It’s a classic Disney attraction and is very much like Disneyland’s Autopia, which was Walt’s own creation.

Today’s speedway is a racetrack attraction that allows guests of all ages, kids included, to drive gas-powered cars. They don’t go very fast, and they are limited to a track so you can’t crash.

This is a pretty popular attraction with limited capacity, so there are often long waits. Plus, these gas-powered cars can be pretty smelly; in fact, there have been rumors that electric cars could be coming to the attraction. Fortunately, this attraction does have a FP+ option.

This roller coaster takes place in the dark with a space theme. You board a rocket ship, take off into the galaxy, and zoom by beautiful star lights. Even after more than 40 years, this is one of the most popular attractions in all of Disney World. As such, the wait times can get very long, so be sure to reserve a FP+!

There are some simple attractions in Tomorrowland like Astro Orbiter. This is a classic “fair” type ride with a center pole and vehicles on arms. Rides like this are normally viewed as “kiddie rides”, but there is no age or height requirements, so adults can ride with their kids.

Guests board a rocket jet and spin around. You can control how high you go, and you’ll get some great views of Tomorrowland and beyond because the attraction sits on a raised platform above the PeopleMover. Guests at Disneyland don’t get the same view because it is not on a raised platform.

The building that housed Stitch’s Great Escape has been a mainstay in the area. It first held Mission to Mars then ExtraTERRORestrial Alien Encounter. Stitch has been the most recent alien to take up residence here, but he is now on his way out as the attraction is closed.

Many people criticized Stitch’s Great for being too scary and thus inappropriate for the target audience, but there are more than a few people that really enjoyed the attraction. Regardless, it was reduced to a seasonal attraction, which is the first step to permanent closure.

The Tomorrowland Transit Authority PeopleMover, formerly known as WEDWay, is a fun and relaxing highway in the sky. It is billed as the future of new transportation, so it’s appropriate that it offers a birds-eye view of Tomorrowland. The train also passes through the Space Mountain pavilion offering a unique view of the inside of the pavilion as the rocket ships soar by, and you’ll also see the model of Progress City, Walt’s concept art of Epcot.

There are no height requirements for this attraction, so sit back and enjoy the ride. The attraction has a huge capacity, so there’s hardly ever a line.  The tram moves continuously, so you might just be able to go around a couple times if you ask the Cast Member at the attraction.  This is especially enjoyable if the kids happen to fall asleep!

While Toy Story Land will be opening in Disney’s Hollywood Studios in the Summer of 2018, Buzz makes his home in Tomorrowland at this interactive attraction perfect for the competitor in your life.

Board the space ship and take control of your laser gun because the evil Emperor Zurg has his sights set on taking over the planet. You have to help defeat Zurg by zapping robots and aliens. Hit as many Zs as possible to rack up points. Then compare your scores to that of your family and friends or try to beat your personal best. Who can earn the most points?

Monsters, Inc. is another very popular Disney*Pixar movie. Instead of aliens, this movie is all about monsters. In the movie, monsters from Monstropolous use children’s closets as a portal to the human world where they have to scare children at night and collect their screams to power the city.

Monsters, Inc. Laugh Floor is a comedy club featuring many of the characters from the movie. Mike Wazowski emcees the show telling jokes and interacting with the audience, and other monsters do skits as well. Make sure you laugh because instead of collecting screams, they’re collecting laughs. Will they get enough laughs to power Monstropolous?

There is a FP+ available for this attraction, but the theater has a very large capacity, so the longest you’ll almost ever wait is for the show before yours to end. While you’re waiting, think of your best joke and text it to the number on the screens inside the queue. Your joke just might end up in the show!

While there is an overall structure for the show, it is very interactive and relies a lot on the audience to make it special. I love this attraction because it’s different every time I go!

Back to another classic attraction, let’s take a look at The Carousel of Progress. The attraction in Disney World is nearly identical to the one that was present at the 1964 New York World’s Fair.

This nostalgic look back through the history of the development of technology and how it’s improved our lives may be a little outdated, but Disney fans love it because it’s a glimpse into the mind of Walt himself.

When you enter the theater, you’ll sit in a theater full of chairs facing the stage. You’re sitting on a carousel (hence the name), which will rotate you through four scenes.

First is the turn of the 20th century when families used gas lamps to light their homes and they had a hand-crank washing machine to wash their clothes. They no longer had to tend a fire or wash clothes by hand!

Next up is the 1920s when the light bulb now lit most American homes. With the invention of electric, they also now had an electric sewing machine, a radio, and a refrigerator. This was a time when technology greatly improved quality of life!

A few decades later in the 1940s, technology advances again and the family in the show, led by John, the father, now has an automatic dishwasher and a television set.

The final scene is Christmas season in “modern” times. John is cooking on a modern stove and using an automatic oven, and the kids are watching HDTV. There are also voice-activated devices including appliances all over the home. During every transition, The Sherman Brothers’ famous Disney song, A Great Big Beautiful Tomorrow plays all around you.

While HDTVs and things like Amazon Echo and Google Assistant are commonplace in today’s homes, the final “modern” scene still seems a little outdated. If you can overlook this flaw, you’ll really enjoy this attraction!

One attraction in Tomorrowland hasn’t been seen by anyone yet. Disney Imagineers are currently building the Tron Lightcycle Power Run, which will be very similar to the one in Shanghai Disneyland. Tron is expected to be open in time for Disney’s 50th Anniversary celebration in 2021.

The Tron: Legacy movie is the basis for this attraction, and the Disney-designed motorbikes will take guests on a ride through the grid on their own light cycle. This will be a major addition to Tomorrowland when it’s completed, and it will sure draw huge lines when it opens.

Tomorrowland is a fun, fast-paced land, and the dining in the land reflects this fact. There are no table-service restaurants in Tomorrowland, but there is some good food offered counter-service style.

The Tomorrowland Terrace Restaurant is hardly ever open during regular hours, but when they are, they serve typical fast food like burgers, salads, and even the good old-fashioned PBJ perfect for the picky kid in your family.

Tomorrowland Terrace opens every evening, however, for the fireworks dessert party. For an extra (read: expensive) cost, you can reserve yourself some private dining of amazing desserts like chocolate dipped strawberries, character-themed sweet treats, ice cream, and a create-your-own-cookie bar. After you’ve had your fill but before the nightly fireworks show begins, you’ll be escorted to the patio of the restaurant where you’ll have reserved seating for Happily Ever After and an amazing view of Cinderella Castle.

Cosmic Ray’s Starlight Café is one of my favorite Disney World restaurants. The food is served quick-service style, but it is oh so delicious! They have some familiar favorites like burgers, hot dogs, fries, chicken nuggets, but what I love about this restaurant is the rotisserie chicken and the healthy sides!

If that’s not enough, you’ll enjoy the tunes of lounge singer, Sunny Eclipse, who provides all day entertainment to guests.

There is some picnic-style seating around the Lunching Pad perfect for a quick rest.

Cool Ship is another counter-service location in Tomorrowland. It has a Space Age theme, and they serve sushi rolls and an edamame salad.

There isn’t any seating here, but you can walk over to the nearby Lunching Pad tables.

What’s your favorite part of Tomorrowland?