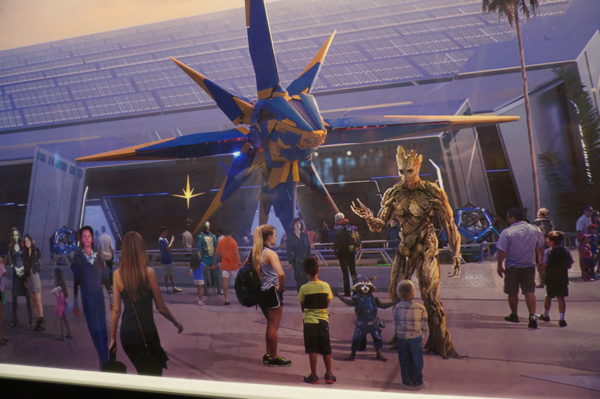 Guardians of the Galaxy Update

A couple years back, rumors were rolling that a Guardians of the Galaxy attraction was coming to Disney parks on both coasts. The attraction has already opened in Disneyland, but it was at the expense of a fan favorite- The Twilight Zone Tower of Terror. Disney World fans were worried that our tower might be at risk of being replaced too, but fortunately that is not the case.

Disney confirmed earlier this year that the Guardians attraction would in fact be coming to Epcot‘s Future World and would replace Ellen’s Energy Adventure in the Universe Of Energy Pavilion, which was long overdue for a makeover.

The Guardians of the Galaxy-themed attraction will be Epcot’s first roller coaster, and it will be open in time for Disney World’s 50th Anniversary Celebration in 2021 as part of the 50 magical improvements.

The entrance to the new attraction will be in the same location as before, and the queue will begin here. It will be broken into two parts with the Welcome Gallery being first then the Xander Gallery. Here, guests will probably see pictures and items from Xander, the planet featured in the movie.

From the queue, guests will head to the first pre-show, called Singularity, which is the same word used to describe the Infinity Stones in the film. This pre-show could reference one or more of those stones, but there aren’t any solid details on that yet. The second pre-show is said to include a screen with appearances from the cast a lot like Guardians of the Galaxy: Mission- Breakout in California Adventure.

Once you board the actual attraction, you’ll enter an entirely new building being constructed just to house this new coaster, which will be 133 feet tall. While the ride itself will have tight turns and long straightaways, there aren’t any inversions. This is a bit surprising for a new attraction being built in Epcot since the rides here are typically meant for older visitors, but it also makes the ride family friendly since inverted coasters require riders to be taller.

There’s no official name for this attraction yet, and we don’t know an official opening date, but stay tuned. I’ll be updating you as information is released!

Guardians of the Galaxy attraction at Epcot:  Excited?