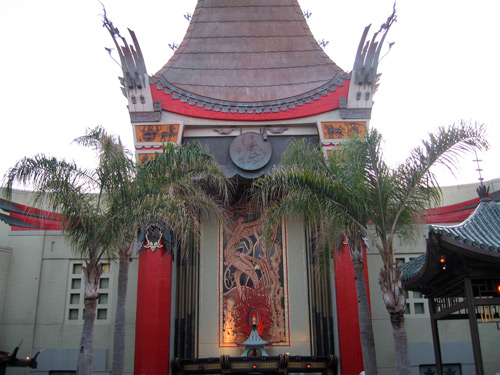 When Disney recently announced that they would remove the ever-controversial Mickey’s Sorcerer Hat from in front of The Great Movie Ride, many people asked the next logical question: What will happen to the Great Movie Ride?

For the first time since 2001, guest will get a clear view down all the way down Hollywood Boulevard. Would the replica of the Chinese Theater still be the “weenie,” or the icon, that pulls you into the park?

Now we have the answer.

It seems The Great Movie Ride is safe for the time being and will get a bit of a facelift.

The project to refresh The Great Movie Ride is expected to start in early 2015 and be complete by spring of 2015.

Interestingly, the reported changes so far seem relatively quick and inexpensive: swapping out movies, adding some new displays, and updating the signs to indicate the new sponsorship.

There is no mention of changes to the heart of the ride or the extensive series of audio-animatronics.

Disney To Provide TCM With Programs

While Disney gets an update for The Great Movie Ride, TCM gets some access to Disney’s huge library of films and TV shows.

Four or five times each year TCM will air blocks of programs called “Treasures From the Disney Vault” that will include documentaries, cartoons, movies, and long-lost episodes of the TV series “Disneyland” and “Walt Disney’s Wonderful World of Color.” TMC plans to air “The Disneyland Story” where Walt himself presents the plans for Disneyland as well as a nature documentary called “The Vanishing Prairie.” TMC will air the first set from 8pm EST on December 21 through 5pm EST on December 22, 2014.

A Place to Call Home

TCM already has a relationship with Disney.

For example, the fourth TCM Classic Cruise was held earlier in 2014 on the Disney Magic ship, which is part of the Disney Cruise Line.

TCM has evidently been dabbling in a trendy new business concept called “experiential marketing.” This is here companies gives customers the chance to experience the brand in-person and not just on a TV screen.

This agreement to refresh The Great Movie Ride will now give TCM another new home in the real world, at Disney’s Hollywood Studios, away from the TV screen.

Are you looking forward to the planned update of the Great Movie Ride?