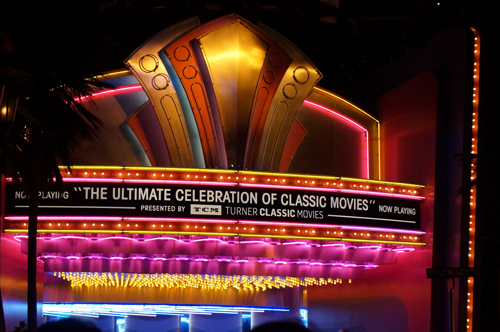 Turner Classic Movies, or TCM, and Disney announced a multi-faceted partnership in 2014.

The partnership included TCM showing Disney films on the TV network in addition to updates to The Great Movie Ride attraction in Disney’s Hollywood Studios.

The changes to The Great Movie Ride are now installed.

Overall the changes are minor, and they don’t impact the heart of the ride. However, the changes do add a bit of freshness to the queue movie and the closing film montage.

You can see the TCM branding before you enter the attraction building.

Once inside the queue, Disney has installed electronic posters that change to advertise classic movies.

In the big theater near the end of the queue (the one just before you enter the boarding area for the attraction), you will watch a new film that is now hosted by TCM’s Robert Osborne. It includes plenty of film clips, and the images are bright and clear.

The attraction itself hasn’t really changed, but Robert Osborne now shares the narration along with a live Disney Cast Member.

The biggest change to the attraction is an update to the movie montage finale. Also hosted by Robert Osborne, it contains movie clips as it has in the past, but the selection of movies and the music is more up to date. It looks like Disney updated the projection technology here as well since the color and quality is great.

The changes that Disney and TCM made are consistent with what the organizations originally announced. The changes aren’t big, but they do update and freshen the most dated parts of the attraction.