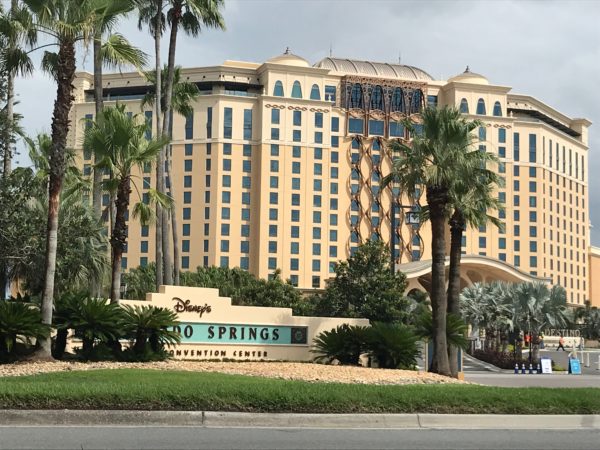 I was invited to the media grand opening event of the Grad Destino, courtesy of the nice folks at Disney Media relations, and I wanted to share my experience with you! Let’s take a look at the updated Disney’s Coronado Springs Resort and the new Gran Destino Tower!

The Gran Destino expansion, announced in February 2017, includes a 15-story tower located near the convention center, floating gardens, and an “oasis” that connects the massive resort with a series of bridges. The expansion included an update of all of the existing hotel rooms in 2018 with new beds and new hard and soft finishes.

Gran Destino is a large tower hotel near El Centro, the main building, and the convention center. Since it is a hotel-style, there are interior walkways, which is a nice amenity. The tower is still moderately priced, so you get a good value for the cost!

The resort features an advanced elevator system where you enter your desired floor, and then the screen directs you to the nearest elevator that will take you there.

A Tour of the Rooms in the Gran Destino

Let’s look at the details in the room.

Check out this Youtube video of the standard room interior.

If you have the means, check out the Deluxe Suite.

Villa del Lago is a new bar and restaurant that sits over the water at the center of the resort. It is reached by trekking across the oasis bridges. Disney says it’s a great place “for light fare and cold drinks.” The restaurant can seat 60 guests, and there’s even additional event space.

With the major update, Disney rebranded the hotel with a new logo that can be seen, at least right now, on trash cans throughout the resort and on new merchandise in the gift shop.

Now that you know all about what is new at the Coronado, let’s take a look back at the resort’s history.

The Coronado is the only moderate resort hotel with suites.

Coronado also offers a cafeteria-style quick-service restaurant and a table-service restaurant, a gift shop, an arcade, a salon, a fitness center, and a dance club plus The Dig Site feature pool and three quiet pools. The Dig Site feature pool, which was also refurbished recently, makes this one of my favorite resorts; there’s a water slide inside the large Mayan pyramid, a jacuzzi, a beach volleyball area, and a snack bar. It’s a great place to hang out on a hot afternoon!

Interested in staying at the Coronado’s Gran Destino Tower?