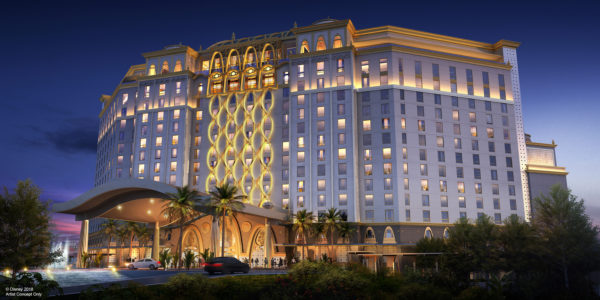 Disney’s Coronado Springs has been under construction for a while now with construction walls covering some of the beautiful views of the resort and causing guests to walk quite a ways around the resort, which is already very large.

The construction centered around a massive new tower that was being raised at the resort, but there’s an end in site! Reservations for the new tower opened on November 27th, and we have some details about what you can expected when it opens!

Gran Destino Tower will open on July 9th, 2019. It stands 15 stories tall with the first two being a grand lobby that will serve as the new entrance for the resort.

Above, there will be 545 new guest rooms including 50 suites. Standard rooms will start at $261 with two queen beds sleeping four adults. Water View rooms will have a similar set up but will increase to $312 for the nicer view. If you want a Water View room with a King bed, you’ll pay $334, but this room will only sleep two adults because there’s only one bed.

All of the rooms appear to have muted tones of tan and green with beautiful fixtures and finishings. All of the rooms throughout the entire resort have been given new treatments, so even if you don’t spring for the tower rooms, which really aren’t much more than other rooms, you’ll still find very nice, new, accommodations.

In addition to the new rooms, the resort is expanding its dining options.

Atop the tower will be a themed table-service restaurant with breath taking views of the hotel. Toledo – Tapas, Steak, & Seafood will sit on the roof and will offer indoor and outdoor seating plus a lounge. The restaurant will feature bold flavors and wines from Spain and California. Advanced Dining Reservations are not available for this restaurant yet, but this isn’t surprising since it won’t open until July. Expect ADRs to open no later than April 2019, which would be 90 days before the resort opens. It could be even earlier than that since the resort offers Club Access, which comes with the option of early dining reservations.

Another new restaurant will open in the middle of Lago Dorado, the resort’s 14-acre lake right at the center of the hotel. Three Bridges Bar & Grill will sit on an island in the middle of the lake and will be accessible by new walkways that will cross the lake. Adjacent to the restaurant will be courtyards for private events. Coronado Springs, a moderate hotel, is a designated conference hotel, so large groups often visit the hotel making these courtyards very valuable.