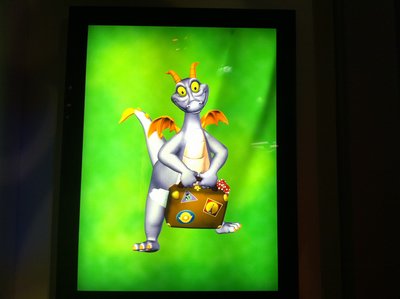 Gone But Not Forgotten: Journey Into Imagination

It is not often that people are willing and able to look back. Looking back at the past is generally thought of as negative, as someone not living in the moment. Tell that to a fan or enthusiast of Disney. As a Disney fan, looking back at the past is a return to childhood, a chance to relive some of our fondest moments. It allows for some interesting conversations, and recollections on the past that bring childlike smiles to the faces of adults.

“Hey remember when Captain Hook took your hat off and tried giving it to some random kid?” Those are the memories that live on.

With those moments of reminiscing, and moments of joy come the memory and sadness of things lost. Places we can no longer visit, attractions that we grew up riding that are no longer in operation, and sometimes attractions that have been changed so drastically that they remind folks of what once was. The original incarnation of Journey into Imagination is just this type of attraction.

Opened on March 5th 1983, Journey into Imagination was the culmination of many years of designing and creation. Though it was previously announced and billed as a possible opening day attraction, technological setbacks caused a delay of the attractions actual opening. This did not however hold Disney back from presenting the two main characters, Dreamfinder and Figment as walk-around characters in the park from day one. Both character had their own quirks, with Dreamfinder (who was originally portrayed in the parks by Ron Schneider) in his now signature beard, black top hat and purple sport coat, and Figment the little purple dragon. Even before the attractions opening these two had popularity.

Upon its opening, Journey into Imagination was an instant success, proving popular to both children as well as adults. The ride employed and Kodak sponsored the Ominmover format, created by Imagineers Roger Broggie, Bob Gurr and Bert Bundage, which allowed for all ages and thrill levels to ride. The ride featured the famous Sherman Brothers creation, “One Little Spark”. This song has become an iconic part of Disney history, as it marked another park only song that became famous despite not being connected anywhere but within the Walt Disney Resort. Though it is still used in the attraction today, the original manifestation of the attraction presented the song as it was intended, sung by both the Dreamfinder and Figment.

The ride began with the sight of an odd floating contraption, the Dream Mobile, with the Dreamfinder sitting atop. As Dreamfinder introduces himself, we learn that he is on a “flight of fancy” and is searching the world for things that spark imagination. During his introduction, he describes what a figment of imagination is, and magically Figment, with childish delight, is created. Figment is described as having, “Two tiny wings, eyes big and yellow, horns of a steer, but a loveable fellow! From head to tail, he’s royal purple pigment, and there, Voila! You’ve got a Figment.” Dreamfinder begins to teach Figment (voiced by Billy Barty) how to fill the idea bag, and when filled they visit the Dreamport, which Dreamfinder reminds us is “never to far away when you use your imagination.”

The attraction continued to different show rooms, Dreamfinder ‘s Dreamport storage room, as well as rooms that represented Art, Literature and the Performing Arts. Each of the rooms had its own flair, with the Art room showing Dreamfinder painting with a fiber optic paintbrush. At the end of the ride Figment learns that the key to Imagination, and the wonders of the world are us, the guests. We all would then pose for an on-ride photo, taken of course by the Dreamfinder, and we are welcomed back to the Imageworks lab to view or photos, and look closer at our Imagination.

The original run of Journey into Imagination closed on October 10, 1998 for what was considered a major renovation. Some rumors persist that when Kodak’s contract was being negotiated, Fujifilm swooped in and offered a deal that included a renovation of Journey into Imagination from an E-ticket Omnimover to a major thrill ride. This seemed to prompt Kodak into finding ways to cut costs of the expensive Journey, which is why its successor, Jouney into YOUR Imagination included more 2D effects, and a much shorter and less popular attraction.

Journey into Imagination, which along with the Imageworks lab, and the Magic Eye Theater (which housed Magic Journey’s, Captain EO and Honey I Shrunk the Audience) were housed together in the Imagination Pavilion, which is known for its iconic glass pyramids.

Rumors have persisted that the attraction may be set for a fourth incarnation, even though many Imagineers have disputed these rumors as false. The rumors include ones that return the Dreamfinder to the pavilion, with a reunion with Figment and the guests who long for his return.

We Can Still Imagine…

Though attractions like the original Journey into Imagination are gone, they do remain in our memory, on home videos, and along the Internet. Many fan sites have been created in its honor, and Disney has even listened to guests plight and longing for the attraction, returning Figment after the failed second version of the attraction. This leads many to hope that an even closer version of the attraction may soon be returning to Epcot. With the refurbishment of Test Track, it appears that EPCOT is on tap, and the Imagination Pavilion is ready and waiting for the Dreamfinder’s return to prominence.

What do you think about Journey Into Imagination?