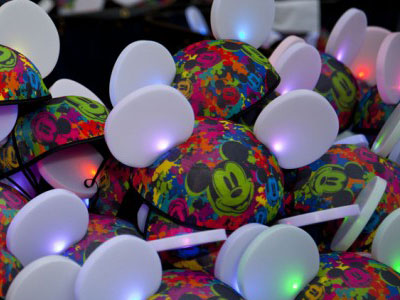 Glow With The Show Ear Hats Arrive At Disney World

Back in the summer of 2012, Disneyland added a new “feature” to the very popular “World Of Color” show at Disney’s California Adventure Park. “Glow with the Show” ear hats, which individual park guests can purchase for about $25.

You get a Mickey Mouse type ear hat with some very fancy electronics. The hat contains an infrared receiver that allows the LED lights in the ears to change colors as directed by nearby transmitters that Disney has installed. The effect is that the hat changes colors to match what is happening in your surroundings.

When a big percentage of the crowd has purchased, and is wearing the hats, the effect is really amazing. Check out the video below of how the ear hats extended the stage of the World Of Color show and turned it into something really unique and immersive.

What happens when not everyone has purchased, and therefore isn’t wearing these glowing ear hats, and you don’t get the effect of a sea of people adding to the effects of the show?

Maybe we will find out.

Disney is adding the Glow With The Show technology to Walt Disney World:

Disney World is going full speed ahead with this technology.

But again, what if many people don’t buy the ears?

Hang in there with me, folks.

Some say this is a classic case of the “prisoner’s dilemma.” That is a classic game theory question where police arrest two criminals. If both criminals remain silent, they both get small sentences;  if they both confess, they both get medium sentences, but if one criminal rats out on the other, his partner goes to jail for a long time but the tattle tale goes free.

Under this game theory, it is statistically best if you always betray your partner (i.e. you tell on them). Interestingly, John Nash, the Nobel Prize winning mathematician portrayed in the movie A Beautiful Mind, documented this effect.

So, all that game theory is well and good, but what does it have to do with Disney World?

If you purchase the Glow With The Show ears for $25, you produce a better show for everyone else around you, but not for yourself. After all, you can’t see your own glowing ears.

If you don’t purchase the ears, but everyone else does, you get a better show and you keep your $25.

If nobody purchases the ears, nobody gets the benefit. By the way, if only a few people have the ear hats, the overall effect of the hats is kinda lame.

It will be interesting to see how many people purchase the ears. Perhaps Disney will play it out for a while, hoping that many people will buy the ears. I suspect that they will be selling these ear hats from the portable carts that pop up each night to sell glowing light sabers and the like. If many people buy them, it will be great. If they don’t, perhaps Disney will offer some incentives.