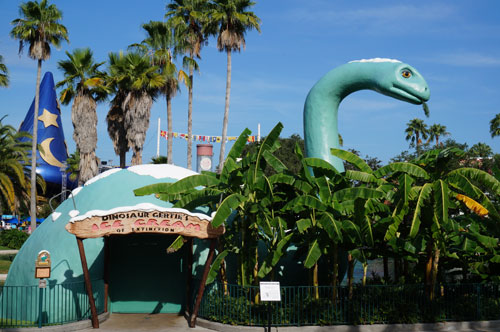 Gertie is impressive, but like so many things at Disney there is much more than first meets the eye. This isn’t just a fun building to serve up cold treats. There are fascinating tributes to both architecture and animation history, in Gertie.

Dinosaur Gertie’s Ice Cream of Extinction, as it’s officially called, is a great example of the “California Crazy” style of architecture – which is also known as programmatic architecture.

It recons back to the period from about 1924 – 1934, a time when Los Angeles and southern California was known mostly for open spaces, plentiful jobs, and high growth.

People came from all around the world to live in southern California. The automobile was becoming the de facto way to get around. Entrepreneurs took advantage of increasing traffic and more roadways to advertise their businesses with their buildings. They made their buildings into huge icons. It caught on with buildings from doughnut shops to orange stands that were shaped like, well, huge doughnuts and oranges.

All this fits in perfectly with the theme of the Echo Lake at Disney’s Hollywood Studios – which is also set in the golden age of Hollywood around the 1920 and 1930s.

Interestingly, there is another great California Crazy example in the Studios also located along the shores of Echo Lake. Min and Bill’s Dockside Diner, which serves drinks and sandwiches, is shaped like a steamer ship. Ship designs were very popular subjects in the California Crazy period.

Also interestingly, Disney did not choose to replicate the original and famous Brown Derby design when they put up their own Brown Derby restaurant in the park.

Perhaps sadly, or mercifully, the California Crazy style of architecture began to become passé in the late 1930s when a more streamlined and modern style of design became the next big thing.

Gertie is also a tribute to one of the earliest popular animated cartoon characters – and that character wasn’t created by Disney.

It was Gertie the Trained Dinosaur who was developed by Winsor McCay.  Windsor was a pioneer in early animation. There were animated features before Gertie, but Gertie was the considered to be the first animated character to have a personality – a development beyond the simple “tricks on film” that made up most early animation.

Back in 1914 Winsor created a film that included animation on the screen together with his personal, live performance in front of the screen where he interacted with the on-screen Gertie character. He would scold Gertie and she would cry. At the end McCay walked behind the screen and then appeared on-screen in animated form where he rode off on Gertie’s back. (Source)

That film was created when Walt Disney was just a boy. As an adult, Walt later acknowledged that McCay’s pioneering work helped create the animation industry. (Source)

The next time you are strolling by Echo Lake in Disney’s Hollywood Studios, take a few minutes to stop by and check out Gertie. You should still get an ice cream treat, but now you also know how Gertie pays tribute to both architecture and animation.

Are you a fan of Gertie the dinosaur at Hollywood Studios?  Do you know her history?