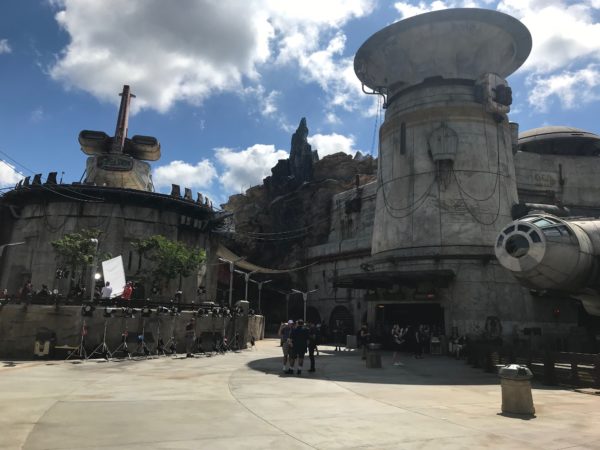 The ceremony started with Hondo Ohnaka who welcomes his “newest associates” and offers you a deal of a lifetime. He is interrupted by Chewbacca, R2D2, and BB-8 who apparently have a problem. Ohnaka says that he would never risk lives over a product. Their conversation is then interrupted again when Storm Troopers arrive looking for “the wookie”. Hondo assures the Storm Troopers that Chewy is a wookie but not the wookie they’re looking for. A spy speaks up in the crowd and distracts the Storm Troopers who chase after her.

Bob Chapek, Chairman of Disney Parks, Experiences, and Products then takes the stage. He praises Disney for defining and redefining entertainment and specifically Star Wars: Galaxy’s Edge for setting a new standard of immersive storytelling. This new land, he says, is the most ambitious Walt Disney Imagineering has ever attempted, and it is unlike anything ever created anywhere. He explains that Galaxy’s Edge is authentically Star Wars and notes that the Disneyland version, which is nearly identical to Disney World, was just named one of the World’s Greatest Places.

Chapek also reminds viewers that Star Wars: Galaxy’s Edge is part of a larger transformation of Disney’s Hollywood Studios which started with the opening of Toy Story Land in May, 2018 and finishing with Mickey and Minnie’s Runaway Railway, which will fill the space that was vacated by The Great Movie Ride. The transformation will also include the opening of the Skyliner, a brand-new form of transportation in Disney World.

The characters join Chapek on Stage, and Chewy shoots an arrow activating fireworks.

Surprisingly, the opening didn’t include as much fanfare as the Disneyland opening.

Will you visit Galaxy’s Edge?