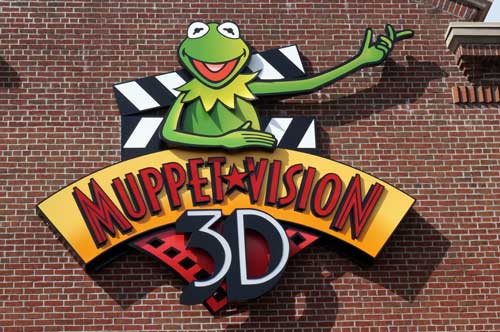 Walt Disney World is often described as the most magical place on earth, and that can often bring about many smiles and much laughter.

Have you ever thought about many funny attractions there are in Disney World though?

There are actually quite a few of them, and I’ve compiled a list of my top five favorites, with an emphasis on attractions that – as a bonus – usually have low wait times.

Ellen’s Energy Adventure, hosted by Ellen DeGeneres, is located in Epcot‘s Future World. In this slow-moving dark ride, Ellen teaches the audience about energy through film sequences that are coordinated with a moving and rotating ride platform.

The ride follows Ellen through a dream sequence in which she is competing in a Jeopardy game (hosted by Alex Trebek) against her high school rival, Judy Peterson (Jamie Lee Curtis). Ellen knows very little about energy, so she is losing the game when Albert Einstein and Bill Nye the Science Guy take her and the audience on a 45-minute educational journey explaining how energy production and consumption works. This may not sound very exciting, but Ellen makes jokes throughout the ride keeping the audience laughing and having fun the whole time.

This is a quality ride, but there is little to no wait mostly because of the amount of people who can fit into the ride vehicle and because of its 45-minute run time. If you need a good laugh and an escape from the heat, this is a great ride to jump on!

4. Journey Into Imagination with Figment

Journey Into Imagination with Figment opened in June 2002 with a return of Figment playing a larger role and a new song, “One Little Spark.”

This Epcot dark-ride is set in an Institute where the scientists study the five human senses. Dr. Nigel Channing starts as the host, but Figment quickly hijacks the tour making it a fun and funny educational ride.

Although this ride is geared more toward a younger crowd, and it has gone through some controversial changes over the years, even kids at heart can enjoy a fart joke every now and then. Even better, there is often no wait for this six-minute air-conditioned ride.

The Muppets have been around for nearly half a century, and with good reason: their comedy is universal across ages and times. Muppet Vision, a 3D Film in Disney’s Hollywood Studios, features audio-animatronic as well as on-screen versions of Jim Henson’s popular Muppet characters.

Kermit the Frog begins the multi-sensory tour of Muppet Studios. The audience will see Fozzie Bear, Waldo C. Graphic, Statler and Waldorf, the Swedish Chef, Bean Bunny, Miss Piggy, and Sweetums. Jokes and antics involving the familiar characters will have guests howling throughout the 15-minute show.

The Jungle Cruise in Magic Kingdom‘s Adventureland is a guided tour through “the jungle.” The Skipper, who drives the boat and tells corny jokes, can make or break the ride. If the Skipper is really into the jokes, the ride will be that much more enjoyable; if the cast member isn’t having a good day or doesn’t enjoy the attraction, it won’t be nearly as much fun.

If you want a unique experience, try riding this attraction at night when the jokes get a little edgier. For even more enjoyment, visit at Christmastime when the ride is re-themed as the Jingle Cruise complete with an attraction overlay and Christmas jokes.

Occasionally the wait times for the Jungle Cruise climb, but you can often ride early or late in the day with a low wait time.

Monster’s Inc. Laugh Floor is as close to a comedy club as you’ll get in Disney World (RIP the Comedy Warehouse). The familiar Monster’s Inc. character, Mike Wazowski, has brought a human crowd to Monstropolis to capture their laughter since laughter (instead of children’s screams) is used as energy to power the city.

This is one of my all-time favorite funny attractions because it’s always different depending on the crowd. The monsters appear on the screen with cast members providing impromptu voiceovers from behind the scenes. What makes the show even more fun is that guests can submit their own jokes via text message, and some of these jokes are used in the show.

Although there is a bit of a “script,” the cast members often stray from it, and I always leave this show laughing and retelling the jokes.

Are you a fan of Muppet Vision 3D?