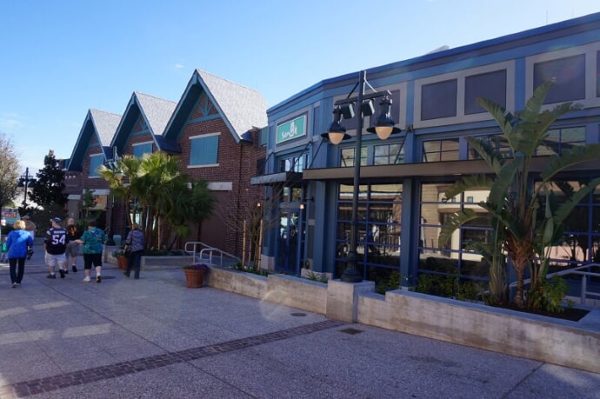 Thanks for joining us on our tour through the Walt Disney World Resort Hotels.  This week we will be highlighting two groups together, The Disney Springs Resort Area and The ESPN Wide World of Sports Resort Area.

As we have been introducing all of these resorts in order of their appearance on property, we will begin with The Disney Springs Resort Area.

Opening back in March of 1975, it was originally called the Lake Buena Vista Shopping Village, then it was Walt Disney World Village, then Disney Village Marketplace, then Downtown Disney and finally has come into its own as Disney Springs. If you want to shop, eat and be entertained until you just can’t no more, this is the place to do it!

Two halves come together in full on wrought-iron balcony fashion in Disney’s tribute to New Orleans and the Old antebellum South, along the Mississippi River.  Originally named the Disney’s Dixie Landings Resort, the Riverside portion of this resort joins the French Quarter side and they connect to Disney Springs via the Sassagoula River for transport by boat and bus.  From the fragrant Magnolias, to the gas lamps, cobblestone streets and Mardi Gras tributes, guests are transported in a way only Disney can provide.

Little Known Fact: Originally opened as the Disney Vacation Club Resort, it changed its name back in January of 1996.

Designed to bring you down to the tranquility of Key West, Florida, this resort is the largest of the Disney Vacation Club Villas consisting of Deluxe Studios, One-Bedroom Villas, Two-Bedroom Villas, and Three-Bedroom Grand Villas.  In 2010 the rooms were all freshly remodeled bringing the resort up to date.  Its connection to the water gives us transport by boat to Disney Springs and also the feeling of being on the island.

Little Known Fact:  Within its 18 buildings there are 828 Vacation Home Units (1260 rooms), plus 60 Treehouse Villas – which makes this the largest DVC Resort on property.

Perfectly placed between beautiful golf greens of Lake Buena Vista Golf Course and Lake Buena Vista, the views and feels of this pristine resort are classic and very much deluxe, also guests are a boat ride away from some top-notch food, fun and shopping at Disney Springs.

Hosting professional and amateur sports games, matches and challenges of all kinds, Disney’s 220-acre athletic complex supports nine different venues and was originally billed as Disney’s Wide World of Sports Complex until February of 2010 when it was re-branded to ESPN.

Little Known Fact: Disney’s Pop Century was originally planned to span more of the entirety of the 20th Century but the construction of the second phase (which ended up being Disney’s Art of Animation Resort) was slowed due to slow tourist travel after 9/11.

The 20th century is celebrated from the perspective of the periods between the 1950’s and the 1990’s in American pop culture here at Disney’s Pop Century Resort.  Cool off at the Hippy Dippy pool, grab some comfort food from the food court or even have pizza delivered for all after a busy day of Magic at the Parks.

Haven’t you ever just wanted to drive into Radiator Springs and stay at the Cozy Coney Hotel?  Well, here you pretty much can! Themed toward Disney classics; Finding Nemo, Cars, The Lion King and The Little Mermaid, there is plenty of animation love to go around! The Landscape of Flavors Food Court can delight most from breakfast to dinner and pizza delivery is available here.

Overall these resorts all have amazing themes, finishes, services, and accommodations.  The one thing they all have is their own identities and appeal to Disney fans.

Stayed at a Disney Springs or ESPN Area Resort?  Want to?