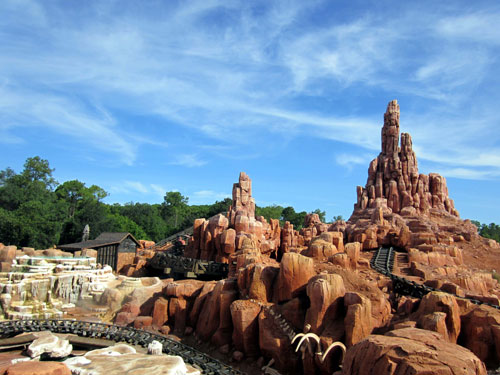 Too many people think that Disney World is just for kids and families with kids. They say that there’s nothing to satisfy the thrill-seeking 20-something crowd.

However, if you know where to look, you’ll find that that is far from the truth.

Besides the several bars and restaurants in the Disney resort hotels, there is plenty of nightlife in Disney Springs and on Disney’s Boardwalk. Jellyrolls, a dueling piano bar provides some unique entertainment for 21 plus-ers as does Atlantic Dance Hall, which plays hits from the 80s, 90s, and today. Speaking of the resort hotels, the pools are always a good place to hang out and relax.

The 20-somethings can find lots of excitement in the parks, too. Let’s take a look!

Magic Kingdom was Disney World’s first park, and it is the last park that Walt had a personal hand in designing. Part of Walt’s intention for Disney World was to create a place where everyone could enjoy themselves regardless of age, but Magic Kingdom is undeniably more geared towards kids with Cinderella Castle, Fantasyland, and the most references to Disney’s animated films.

Don’t worry. There are some great attractions for adults.

Let’s start in Tomorrowland, which is themed as a futuristic land with a singing alien and even a blast from the past in Carousel of Progress. You’ll find one of the most thrilling attractions of the park here. Space Mountain has been exciting guests of all ages since 1975. If you really want a thrill, ask the Cast Member if you can sit in the back of the ride vehicle. You’ll really feel the twists and turns from here!

Liberty Square is not too far away. The Haunted Mansion is arguably the best attraction in this land. What’s really interesting is that Disney Imagineers designed this attraction with a pretty adult theme, and many people wonder how it made it into a “kid’s” theme park. In fact, Walt himself designed the mansion and he wanted it to appear even more eerie than it already does. Interestingly, the scariest part is at the beginning of the attraction (or the end of the queue depending on how you look at it) with the stretching room. Here, the narrator tells you that he ended up in the mansion after he hung himself. That’s pretty heavy stuff for kids! By the end of the attraction, it’s obvious that it is all in good fun and you’re back in the Disney spirit in no time.

Frontierland holds a couple big-ticket attractions. Splash Mountain is a classic log flume ride with a Disney twist. Inside, you’ll find an original score to accompany some fun characters in a chase for Br’er Rabbit. There are a couple fun drops along the way, but the five-story drop at the end is the real thrill. Smile for the camera! Oh, and be prepared to get a little wet. The other attraction in Frontierland that is appropriate for “big kids” is Big Thunder Mountain Railroad. “The Wildest Ride in the Wilderness,” as it’s called, twists and turns through the mountains providing an excellent thrill.

Even big kids love fireworks, and Magic Kingdom has some of the best! Happily Ever After combines projection with lasers, fireworks, and a little bit of Disney magic. It’s definitely a sight to behold!

Disney’s Animal Kingdom was the fourth and final park to open in Walt Disney World, but it packs a nice punch when it comes to adult attractions. While there are animal encounters that will delight anyone who is into nature, this is much more than a zoo. One of the most unique animal encounters can be found in Kilimanjaro Safaris. This attraction has a totally different vibe after sunset, so if you happen to be visiting while Animal Kingdom has evening hours, you won’t want to miss it. It’s true that you wont get good photos and you’ll see fewer animals that you would during a daytime ride, but what you do see feels more intimate. I suggest riding during the day and at night if you can. You won’t regret it.

Expedition Everest is a completely different attraction, but it is equally exciting. This was the most expensive rollercoaster ever built when it opened in 2006, and it is listed in the Guinness Book of World Records in 2011 as such. Explorers board a train that reaches speeds of 50 mph and careens toward a broken track where it stops abruptly and flies backwards encountering a Yeti along the way. With an 80-foot drop in there too, your heart will be pounding throughout the ride. If you really want a thrill, ride in the dark. Not being able to see the broken track makes it even more exciting!

Disney’s Hollywood Studios is undergoing some major renovations right now as Disney turns the Star Wars and Toy Story attractions into entire lands, but many people have rejoiced that Sunset Blvd has remained largely unaffected.

As you walk down Sunset Blvd, you’ll pass some delicious restaurants including a counter-service selling the famous turkey leg. Are you up for the challenge?

Rock n Rollercoaster is near the end of the road. This is the only rollercoaster in Disney World that has inversions, and it’s also one of the fastest. Within 2.8 seconds of launch, you’ll be going 58 mph, and at the first inversion you’ll feel 4.5 G force. You’ll need a minute to get your land legs after you get off this attraction!

Twilight Zone Tower of Terror looms in the distance. It looks haunting and creepy even from the beginning of Sunset Blvd. This 13-story building drops and lifts riders several times throughout the ride. There are dozens of drop sequences, so even if you ride several times in a row, you might have a different experience each time. Regardless of your sequence, you’ll always have a false drop and a full drop of 39 feet. If you really want a thrill, ride at night!

These attractions welcome kids who are willing – and daring – enough to try them out, but the big kids will really love them.

Epcot is probably the best park for adults and the worst park for kids because there are so many adult-appropriate attractions. It’s kind of two parks in one with Future World being on one side of the World Showcase Lagoon and World Showcase on the other side. Both of these areas are different, but there’s a ton for adults to do on both sides.

Future World has several exciting attractions including one of my favorites: Soarin. This 4D experience was recently updated. Now it not only flies you through some amazing areas throughout the world, it also integrates the sense of smell and touch like the old attraction had. On the other side of Future World is Test Track, which allows guests to create and test their own SimCar through a variety of conditions including a launch sequence that propels you towards a wall reaching speeds of 60 mph. Mission: Space is also a popular attraction for adults. There are two options: The Green Team and the Orange Team. The Green Team was added shortly after the attraction opened because the Orange Team’s spinning ride vehicle proved to be too much for some guests. Don’t get the impression that the Green Team option is subdued. This is one of the most extreme attractions in Disney World. In fact, NASA Astronauts who helped design this attraction said it’s the closest they’ve ever experienced to an actual space shuttle launch.

In World Showcase, the other side of Epcot, there are eleven country pavilions with cultural food, drinks, and shopping in each one. While most kids would find this area kind of boring, adults love it. Each country has at least a couple restaurants serving up delicious, authentic dishes. There are also quick-service locations serving food and drinks from each country. The very popular “Drink Around the World” activity can be had here as well. Try margaritas in Mexico, Sake in Japan, Grapefruit Beer in Germany, and wine in Italy. There’s something for everyone!

Like Magic Kingdom, Epcot has an amazing nightly show called IllumiNations: Reflections of Earth. The complex story of Chaos, Order, and Meaning is often too much for little kids to understand, but many adults are emotionally affected by the show. The combination of the gigantic globe, lasers, fire, and fireworks lead to a unique experience.

Adults can easily spend a couple days just in Epcot.

Do you think Disney has enough for the 20-something crowd?