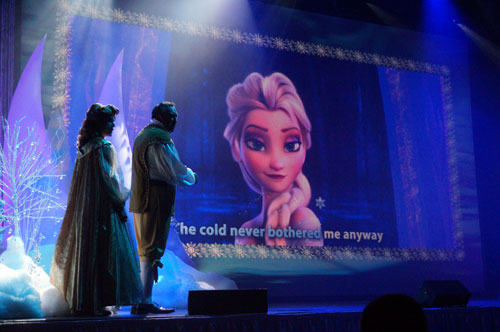 There are many different events taking place as part of “Frozen” Fun events at Disney’s Hollywood Studios.

Earlier, we looked at Anna and Elsa’s Royal Welcome, a parade with Queen Elsa and Princess Anna as well as Kristoff, skaters, skiers, and ice cutters.

Today, we are going to look at the sing-along, which has a long official name: “For the First Time in Forever: A “Frozen” Sing-Along Celebration.”

Disney offered tickets printed with each show time and a return window. If you plan on checking out this event, be sure to get your tickets early. I suspect this will be a popular show that will regularly fill up.

Anna begins the show with a humorously awkward introduction, but eventually two Royal Historians take over for most of the dialogue. These Historians do a great job of connecting the stories and adding some humor.

The show, which lasts for about 30 minutes, quickly retells the story of Frozen. The pace is fast, but there is plenty of time for singing-along.

Disney uses some special effects including lighting, fog, and a snowfall toward the end. Most of the presentation is delivered through clips from the movie that are projected onto a large screen.

At the end of the show, Anna, Elsa, and Kristoff join the Historians for the grand finale.

[video_youtube video_url=”https://www.youtube.com/watch?v=dzWrAPAVHrM” width=”480″ height=”360″]
The show moves quickly, but it is fun.

Overall, the show is fairly simple, but it is, in my opinion, a winner. It really helps that Disney had so many wonderful songs from the movie to include. Even through the show was simple, the audience loved it, sang along, and had a great time.

Do you like the idea of a Frozen Sing-Along at Hollywood Studios?