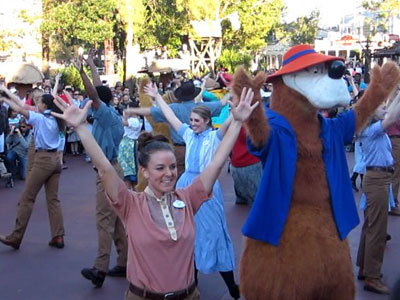 Three Things To Love About The Frontierland Hoedown (With Video)

I don’t know about you, but I just love it when Disney puts in details or a show that really aren’t necessary. One of my favorite examples is the Main Street Trolley Show. Nobody books a trip to Disney World just to see that show. But many people stumble across it, and really enjoy the show and how it sets the mood of small-town America on Main Street USA.

Another terrific example, which I’ve only recently discovered, is the Frontierland Hoedown. For those of you who might not know, a hoedown is an American folk dance or square dance, popular in the old time west. Just the thing for Frontierland.

The show includes the songs Devil’s Dream (a classic fiddle tune that you will recognize when you hear it in the video), Rocky Top, The Hokey Pokey, and Come Again (We hope that you’ll be coming back again).

It starts with a few performers, but soon they are joined by Disney characters – many of whom you don’t see very often. From the Country Bear Jamboree you will see Big Al and Wendell. Brer Bear and Brer Rabbi from Song of the South join in. And you can also see Clarabelle Cow (a Disney cartoon character invented in 1928 who is one of Mickey Mouse’s best friends, and not often seen) and Horace Horsecollar (another Disney character we don’t see nearly enough these days – he’s known as a cheerful know-it-all).

Here are three things to love about the Frontierland Hoedown:

Ok, I know that very few things at Disney World are really spontaneous. I know that the show is carefully timed and choreographed. But this show has a spontaneous feel.

There are no roped off areas for the show. It takes place in the middle of the street, and begins with the ringing of a bell. One or two Cast Member dancers begin dancing in the street, and soon others join in. People naturally get out of the way, and Characters and Cast Members quietly and almost undetectably walk around the happenings to clear people away. It has the feel of a flash mob – a show that just comes together in a fun, spontaneous, and special way.

Ok, I know that Disney carefully trains its Cast Members to smile. Maybe they put Prozac in the water supply. And I also know that the hard working folks who put on this show have probably done it hundreds of times before. But there is something that seems especially genuine about these performers. That they are really having a hootin’, hollerin’ good time! Just check out the video and look at the smiles and the banter. It seem that they really are havin’ fun!

The start of the show is choreographed, but soon the dancers are inviting children from the audience to join them in dancing around the circle or joining in the Hokey Pokey. Everyone joins in and soon there is fun all around. You see smiles on performers, kids, and parents alike.

How To Catch The Show

You won’t find the show listed on the Times Guide that lists show times. Most people only get to see the Frontierland Hoedown because they happen to be in the area when it takes place. In fact, if you want to plan to see the show you will need to ask for the day’s show times at Guest Services on Main Street, or perhaps ask the Cast Members around Frontierland. I’ve seen the show scheduled for only morning hours on some days, only evening hours on other days, and not at all on some days.

It’s worth taking a few minutes to catch the show. Check out the video, and have a smile.

What do you think about the Frontierland Hoedown?