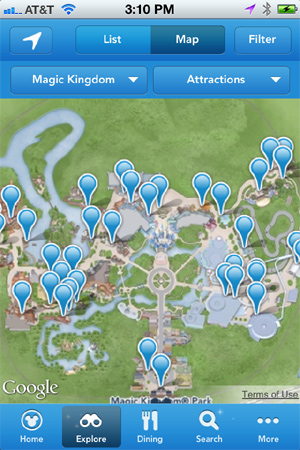 People visiting the Magic Kingdom can now connect to Disney’s free wireless internet network. It is called “Disney-Guest” and provides for complete access to the internet. This means that you can check your e-mail, post an update to Facebook, or check out the latest news with your smart phone’s browser.

According to the Inside The Magic Disney fan web site (Source), a Disney spokesperson has announced plans to provide the free internet access at the other three theme parks (Epcot, Disney’s Hollywood Studios, and Disney’s Animal Kingdom) and also Disney Springs by sometime in 2013.

Some people have reported that the free Internet connection is very slow, while others have seen decent speeds. Your speed will likely vary will depend on the total number of people who are using the system at any given time, as well as how far away you are from the nearest router.

That’s Great, But Why?

So why does Disney offering this free internet service? Part of it is that we simply live in a very connected world. People expect to have a connection to the internet at all times. Also, many people want to share their lives as they happen through social media services like Twitter in Facebook. And perhaps the more happy friends you see enjoying a Disney World vacation, the more you will want to have one yourself?

However, many expect that the rollout of free internet access is also connected to Disney’s NextGen activities. While it is generally assumed that Disney will not require the use of smart phones or other internet connected devices to participate in the NextGen Services, many guests will find more and more ways to use internet connections in the parks for both day-to-day communications as well as some possible new Disney Services – like the new iPhone App Disney just launched.

One of those new experiences is a new free iOS application called “My Disney Experience”. This application allows guests to check wait times, see show times, view park maps, and make dining reservations. Some people also think that this application will link to the NextGen services eventually.

The new application is available at the Apple App store. I loaded it onto my iPhone with no problem. 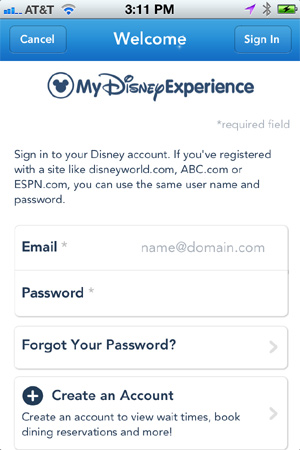 The application required that I log in with my Disney ID and password to see real wait times.

In the past I accessed wait time information from an independent pay service called TouringPlans.com. The data on that service did not get data directly from Disney. Instead, it was based on both statistical predictions and actual reports from users in the park that day. It’ll be interesting to see how the information directly from Disney compares to these estimates and user reported wait times.