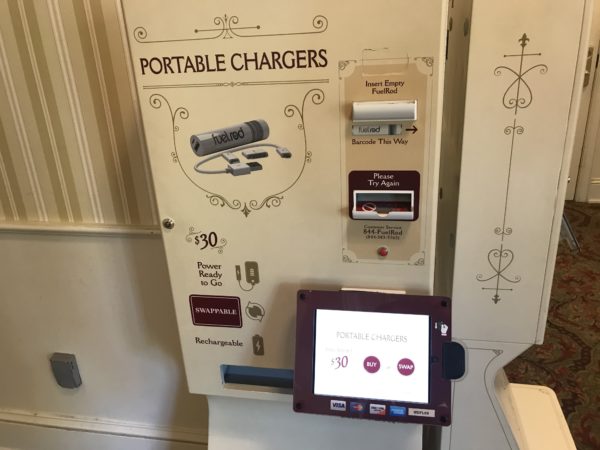 FuelRods have been a popular phone charging option in Disney World, Disneyland, Universal Studios Orlando, and more in recent months. The concept is pretty cool, and it’s also very convenient. After all, we all know that MyDisneyExperience can be a significant drain on the battery!

Basically, the concept is that you purchase a charging kit for an initial fee of $30. The kit includes a fully-charged battery and a charging cord with adaptors for Android and iPhone devices.

Until recently, FuelRod stations, located at all of the theme parks, both water parks, and at ESPN Wide World of Sports and Disney Springs, offered free swaps, which, theoretically, would keep your phone charged indefinitely.

Disney began removing the “free swaps” signage in September.  Even though Disney had not yet started charging for swaps, people became grumpy.

Disney announced, however, that the swaps will remain free – for now.

What makes FuelRods great is convenience! If you’re in a pinch and need a charge right now, FuelRod is the place to go.

Do you use FuelRods?  Glad that Disney won’t charge for swaps?